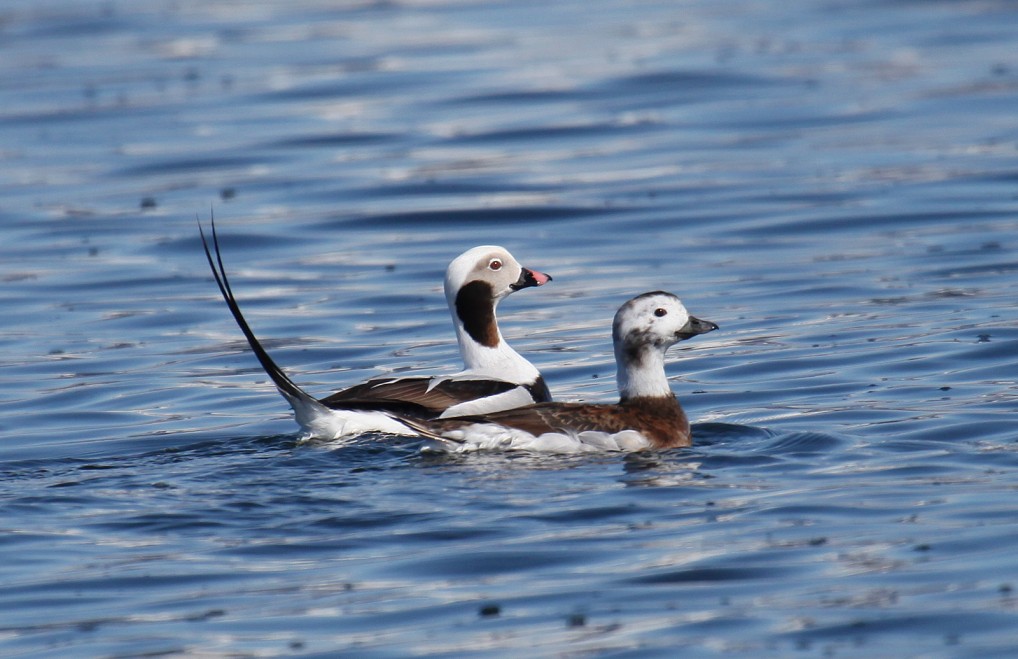 The Long-tailed Duck and the Pacific Birds Region

The Long-tailed Duck is a fascinating sea duck that has an expansive range in the northern hemispheres. They breed in the far north of the U.S. and Canada, Greenland, Iceland, northern Europe and Russia. In North America, they breed in the arctic and sub-arctic, and winter along both the Pacific and Atlantic coasts. Within the geography of Pacific Birds, the species mostly breeds in northern and western Alaska, and winters in coastal areas of Alaska, British Columbia and the Pacific Northwest.

What makes them unique?


Several features make the Long-tailed Duck an interesting member of the sea duck group. The males sport an elongate pair of twelve-inch long tail feathers, giving them a graceful appearance at rest and in flight. The species also has three plumages rather than the usual two, giving more variety to their appearance throughout spring, summer and fall.  Unlike other ducks, their basic, less colorful plumage is worn in the breeding season, and the more striking alternate plumage is worn in the winter. Long-tailed Ducks are also known for their impressive, loud vocalizations. You can hear them on Bird Note, or from the Alaska breeding grounds on The Cornell Lab Bird Academy website.

Long-tailed Ducks spend most of the year in the marine environment, feeding on crustaceans, bivalves, snails, small fish and other animal and plant food items. They spend a great deal of time under the surface, diving and swimming for food. They also set the diving record for ducks, going as deep as 200 feet, although usually they are in shallower water.

Not much is known about the migration routes of this species. In the Pacific Birds region, northward migrants congregate in southwest Alaska and they will also be found among ice leads prior to the breeding season.  In the spring, it is estimated that about a million Long-tailed Ducks are found in the Beaufort Sea prior to dispersal to breeding areas. They generally breed north of or at the northern edge of the boreal forest- along the coasts and inland on low tundra along lakes, ponds, and wetlands. Within Pacific Birds boundaries, they winter along the coast in southern Alaska, British Columbia and the Pacific Northwest, especially in North Puget Sound.

While the Long-tailed Duck has both a broad distribution and is still abundant, they still face conservation threats on both the breeding and wintering grounds. The International Union of Concerned Scientists (IUCN) has listed the species as vulnerable due to population declines in some areas. Population numbers are hard to estimate due to their low density on the breeding grounds, coupled with their offshore winter distribution. Conservation threats include fishing nets, avian disease and and climate change. The ducks also congregate offshore, making them susceptible to oil spills or other pollution events. Audubon’s Important Bird Area (IBA) Program has identified several IBAs in north and northwest Alaska that support Long-tailed Ducks. One, the Point Lay Marine Important Bird Area, is identified as a globally significant site for foraging Long-tailed Ducks, with use by an estimated 13,000 birds. Researchers have identified a number of study needs to further inform current or future conservation actions for the Long-tailed Duck.

Map of Long-tailed-Duck in Northern Alaska (from the Arctic Marine Synthesis: Atlas of the Chukchi and Beaufort Seas)