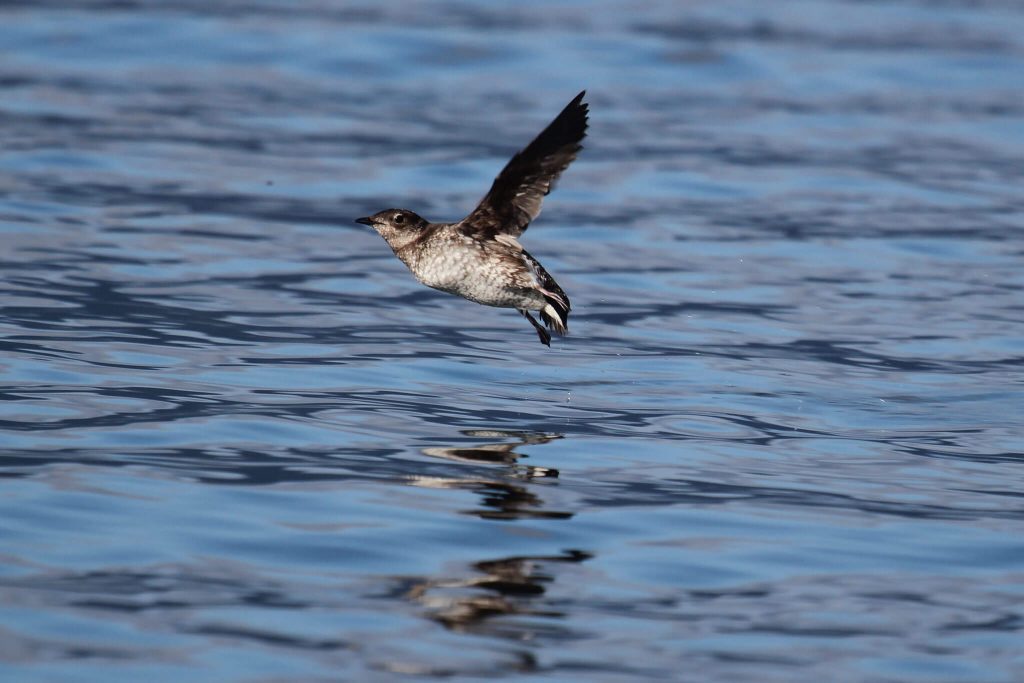 Meet the Seabird that Nests in Trees

Few birds epitomize the wilder parts of the Pacific Northwest coastal forests more than the Marbled Murrelet. This small, diving seabird feeds in marine waters and most frequently nests in mature or old-growth conifer stands. The nests are usually within a few miles of shore but they have been known to travel up to 50 miles inland to nest–which is quite a feat, since the parents bring the sole chick fish several times a day for about a month. And then, the first flight of the fledglings must carry them all the way to the ocean!  These sea-to-tree travels earned them the nickname "fog larks."

The first well-described tree nest was only discovered in 1974, and that was an incidental discovery by a tree surgeon in California – 170 feet off the ground. The murrelet "nest" is but a mossy platform on large diameter branches on old conifers, where the egg rests under the protective insulation of the incubating adult. Many more nests have been located in the past forty years, but the species is elusive and a challenge to study in the towering old growth. In some parts of their range, Marbled Murrelets nest on open ground, on cliffs or in other habitats.

Marbled Murrelets have the inherent challenge of a low reproductive rate, making them both susceptible to environmental change and slow to recover from population declines. Their older-forest nesting habitat has been extensively logged or fragmented in the southern parts of their range. And, especially in areas where forest stands are less intact, other birds are causing problems for the murrelets – see "Fake Marbled Murrelet Eggs Cause Jays to Vomit" in BirdNote. They also face significant threats in their marine habitat, such as oil spills and fish net entrapment.

In North America, Marbled Murrelets range from the Aleutian Islands in Alaska to mid-California with about 70% of their population in Alaska. Marbled Murrelets in Washington, Oregon and California were listed as Threatened under the federal Endangered Species Act in 1992. Monitoring of breeding birds has yielded data that suggest declines continue in parts of the Pacific Northwest. While the birds are more abundant in Alaska and Canada, those populations have also seen declines. Critical conservation actions include protection of their nesting habitat and minimizing impacts from marine pollution. 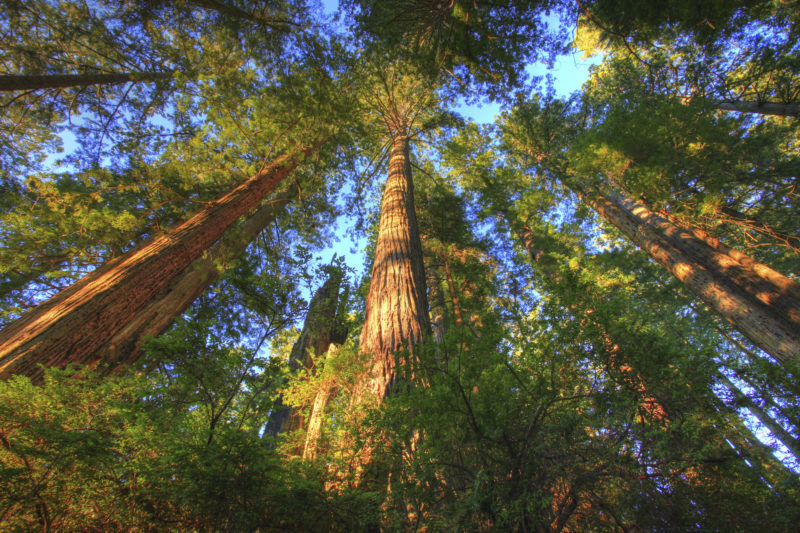 The North American Range of the Marbled Murrelet 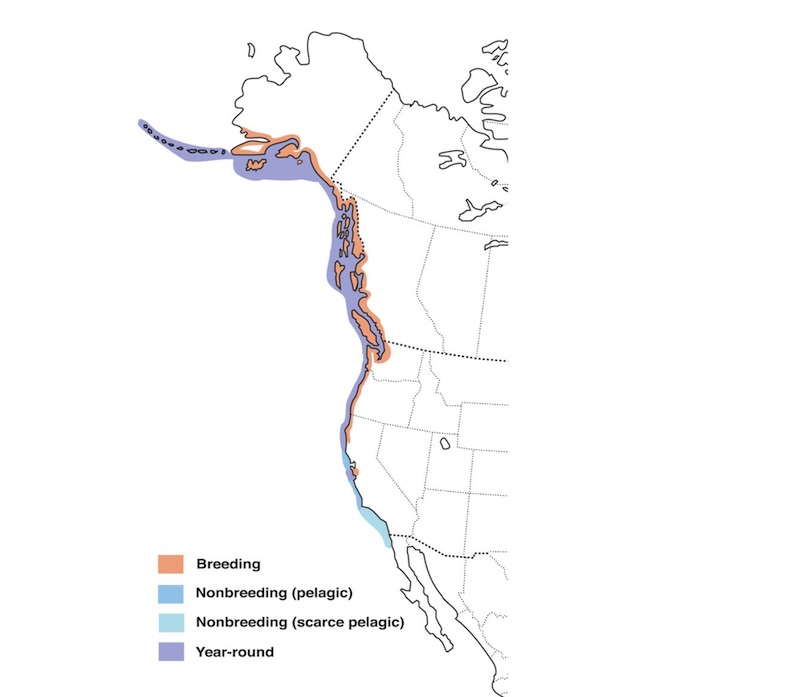 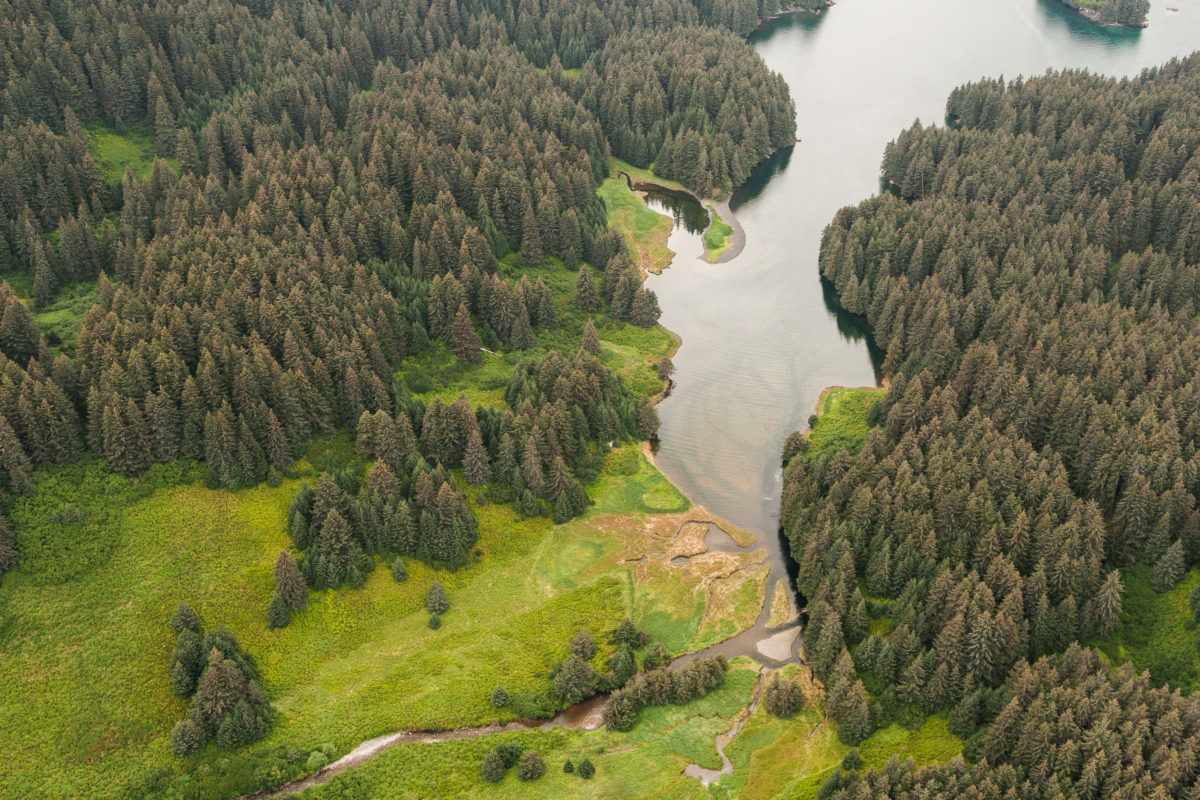 The Great Land Trust, based in Anchorage, has helped to protect 36,000 acres of coastal rainforest on Afognak Island – known habitat for the Marbled Murrelet and a variety of other species. Photo – Matt McMillan.