Trends in boreal bird populations are of special interest to Professor Audrey Taylor at the University of Alaska, Anchorage (UAA). A number of boreal breeding species are in decline or suspected to be in decline, but most of the data showing population trends is from “the lower 48.” Not as much is known about the trends in Alaska and Audrey and her fellow scientists would like to change that.

Most of the species suspected to be in decline in Southcentral Alaska are wetlands-dependent, and/or are “aerial insectivores” that rely on insect hatches for food, especially during the short nesting season. Partnering with Audubon Alaska, Audrey targeted seven of those species to learn more about: Lesser Yellowlegs, Greater Yellowlegs, Solitary Sandpiper, Tree Swallow, Violet-green Swallow, Olive-sided Flycatcher and Rusty Blackbird.

Birds ’n’ Bogs was born in 2013 to enlist volunteers to help determine trends of those seven species in Anchorage and Matanuska-Susitna Valley wetlands. Citizen science programs provide the people power needed for the hundreds (and eventually thousands) of observations that are needed to detect long-term trends in species. That first year, 25 volunteers visited 32 sites during the month of May. In 2017, 39 volunteers visited 51 sites. At two hours of observations per volunteer each year, the data adds up quickly.

Nancy Moore has volunteered for Birds ‘n’ Bogs for three years and appreciates that her observations are contributing to what we know about boreal birds. As she says, “I am concerned about the environmental effects of a changing climate. Long-term monitoring allows us to detect species' responses to those changes, and helps us decide what actions to take." For Nancy, the monitoring is also about quality time birding and observing nature. “I love the diversity of wetlands. Volunteering gets me out to see things I normally wouldn’t, such as the Solitary Sandpiper.”

In 2016, Birds ‘n’ Bogs joined forces with the 30-year-long Alaska Loon and Grebe Watch citizen science project, currently administered by the Alaska Departmend of Fish & Game. This program shows the power of a long-term data set to detect trends. In Anchorage, Common Loons have shown an increase, and Pacific Loons a decrease in adult abundance, but it took a number of years and volunteer hours to see the trends.

This power to detect change is important to researchers, and with another few years of data Birds ’n’ Bogs should start showing robust information on distribution and population trends for these wetland-associated boreal species. In the meantime, the observers in the field are all contributing to knowledge about the effects of a changing climate, urbanization and other factors. 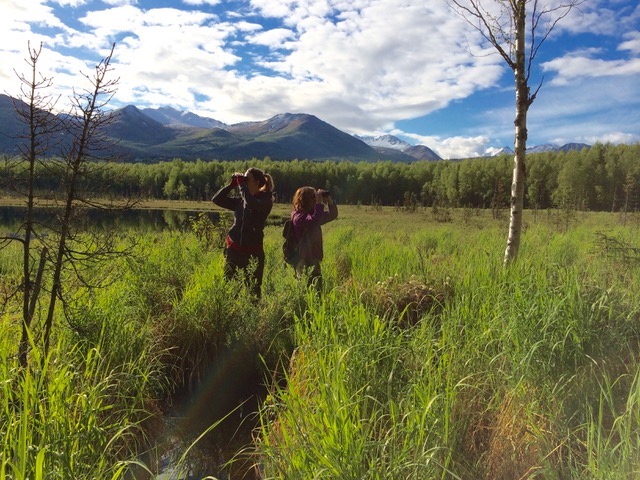 Enlisting volunteers in citizen science goes beyond the data. Awareness promotes conservation, and putting “resident” volunteers and UAA student coordinators together in the field has increased community connections. Participants tend to be long term community members, interested in what they see in the natural world over time. The student program coordinators are generally less rooted in the community, but passionate about the science. This creates opportunities for beneficial cross-generational experiences.

The majority of UAA Birds ‘n‘ Bogs student program coordinators have continued on to jobs or graduate school in ornithology. One prior coordinator is now a field crew leader for Virginia Tech’s Shorebird Program on Long Island, and another has been working for USGS’s Western Ecological Research Center on projects examining wetland bird responses to sea level rise.

The 2018 Birds ‘n‘ Bogs program starts with a training in early May. Volunteers are asked to visit their designated wetland four times between May 9 and June 1.

Want to volunteer? Contact Audrey Taylor before the end of April.

Thanks to the partners who have supported Birds ‘n’ Bogs in various ways, including Audubon Alaska, U.S. Fish and Wildlife Service, University of Alaska, and the Alaska Department of Fish and Game. And, of course, the volunteers!