New Conversations about Oak in the Umpqua River Basin 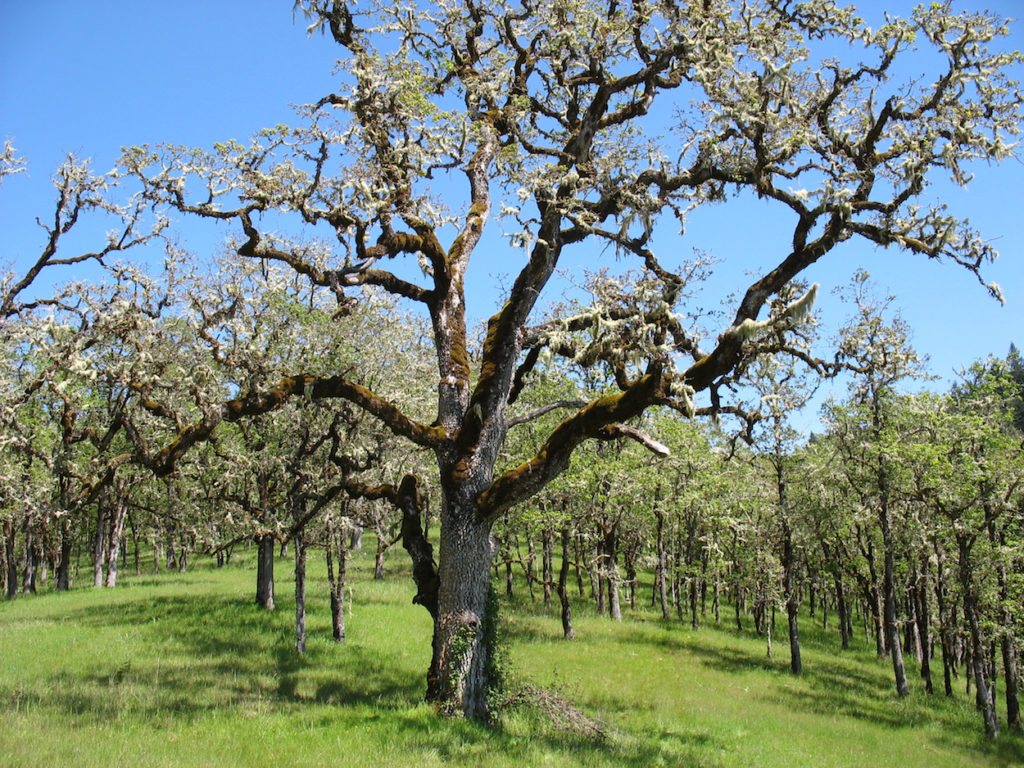 Umpqua partnership gains traction in a stronghold for oaks

The interior valleys of the Umpqua River basin are home to some of the most extensive oak savannas and woodlands in the Pacific Northwest.

But conifers are king in southwest Oregon’s Douglas County, the state’s largest timber producer. Thirty years of conflict and controversy over endangered species, logging, and old growth forests have made it a tough place to talk about habitat conservation.

But with local residents taking the lead, the year-old Umpqua Oaks Partnership is off to a strong start in engaging local stakeholders in efforts to protect and restore oak habitats. It helps that oaks don’t come with the kind of baggage associated with spotted owls and endangered salmon.

“It’s easier to talk about conservation because it’s not born out of conflict,” said Alicia Christiansen, a Roseburg-based forest advisor with Oregon State University’s Extension Service. “Because there aren’t those economic ties to oak, people are more likely to be open to conserving that type of landscape and ecosystem.”

Steve Denney, the Umpqua Oaks Partnership’s part-time coordinator, says he has been impressed with the level of interest in developing a more organized approach to oak habitat conservation. The group held its first meeting only a little over a year ago and has been convening regularly ever since with a core group of about 20 participants, including private landowners, state and federal agencies, and the Cow Creek Band of Umpqua Tribe of Indians.

“We’re getting new members, people calling, wanting to get involved,” said Denney, a former Oregon Department of Fish and Wildlife regional supervisor and later a project manager for The Nature Conservancy who can’t seem to fully retire. “People see the need and see things happening – that’s a real incentive.”

It helped that the group wasn’t starting from zero. The Natural Resources Conservation Service (NRCS) and other partners had done quite a bit of restoration work in oak woodlands on private lands and a large county park. The Bureau of Land Management acquired a block of more than 6,500 acres of oak habitat along the North Umpqua River in 1994 that helped lead to the de-listing of the local population of Columbian white-tailed deer. The U.S. Forest Service has also done significant oak restoration work on the Umpqua National Forest. And the Cow Creek tribe has a strong interest in oaks and their associated cultural and wildlife values.

Things had stalled out a bit after a group of partners completed a prairie and oak conservation strategy for the northern part of the county in 2013. Following an initial meeting of potential partners in Roseburg in early 2018, the group really began to take off last summer after Denney agreed to serve as the coordinator and Pacific Birds and the Oregon Wildlife Foundation chipped in some funding to help support his work through the Partnership for Umpqua Rivers.

The Umpqua Oaks Partnership got a later start than four other Oregon-based partnerships that are well on their way to completing strategic action plans with funding provided by the Oregon Watershed Enhancement Board. But even without that financial support, the group has already take some first steps toward its own planning effort, including an initial identification of the major “threats” to oak habitats in the Umpqua basin. Those threats look a lot like those in other areas; see Threats to Oak and Prairie Similar across Pacific Northwest.

For many of the group’s participants, the primary interest is in getting projects going on the ground. David Ferguson, NRCS’s district conservationist for Douglas County, thinks his agency will be able to tap into several hundred thousand dollars a year in Farm Bill funding for work with private landowners. He’s also confident that landowners will want to step up, whether it’s because they want to clean up damage from last winter’s big snows in the north end of the county, or combat the invasion of conifers into grazing lands, or reduce their wildfire risks, or for ecological reasons.

“Most of the time we find resistance to conservation work because it relates to water, or recovery of threatened and endangered fish, and it has direct impact on resource extraction, timber,” said longtime activist Stanley Petrowski, who heads the South Umpqua Rural Community Partnership. “When it comes to oak habitat restoration, there are several pluses. These once-open oak areas are now encroached on by conifers so that means there’s going to have to be some timber extracted, and by and large, ranchers and landowners that actually do appreciate the value of oak won’t find themselves in a maelstrom if they cooperate.”

By way of example, Petrowski points to the Elk Creek Watershed Partnership project, where strong local support helped secure almost $600,000 from the Forest Service and NRCS earlier this year for work to reduce fuel loads and restore oak, pine, and meadow habitats on a mix of public, private, and tribal lands on the Tiller Ranger District.

“I think we have a real opportunity here in Douglas County,” said Petrowsky. “I’d go so far as to say there’s more viable oak habitat here than what’s left everywhere else west of the Cascades.”

But getting people to understand the need for action requires education and outreach, according to Christiansen, the OSU extension agent.

“I work with a lot of small landowners who have oak woodlands who don’t understand their importance and values and the reasons for the historic declines,” said Christiansen. “I remind them we have a place here called Oakland (a small town in northern Douglas County), and it’s an ah-ha moment for people. Oak-land. It really tells us a lot about the land and the historic landscape.“