A Season of Saw-whet Owls 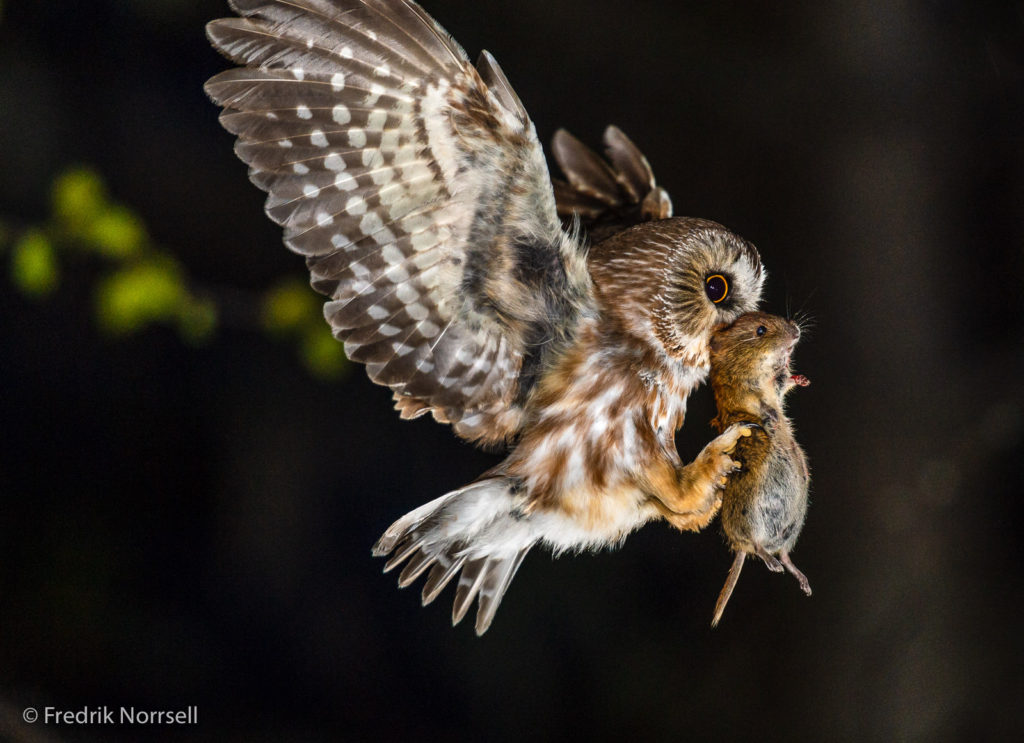 Editor’s Note: In the Pacific Northwest and parts of Alaska, Northern Saw-whet Owls are already nesting, or will be soon. In 2019, photographer Fredrik Norrsell captured most of the nesting season on camera from his home. We hope these images will inspire you to be on the lookout (and the listen) for these small owls. Hear what they sound like on BirdNote.

Long nights with some small nesters

Fredrik Norrsell is a wildlife photographer who now lives in Southcentral Alaska with his wife Nancy Pfeiffer. Although they live on the road system, they are off the grid. There isn’t a lot of light pollution, and it is quiet. On January 16, 2016 Fredrik saw, and photographed, his first Northern Saw-whet Owl perching on a branch near his front porch. He first noticed the owl’s presence by the fact that a swinging chair on the porch was swinging–but there was no wind.

Fredrik and Nancy put up a nest box that spring, but had no takers for the first few years. On April 1st, 2019 Fredrik saw a head poking out of the nest box–and then spent most nights over the next 10 weeks capturing the mostly nocturnal life of the male, female and eventually four young owls. Since the nest box was close to their house, they had a great vantage point. Photographing a fast moving and diminutive owl, at night, presented its own set of challenges, however.

The range map of the Northern Saw-whets, and the records on eBird, show that Southcentral Alaska is just within their range. Fredrik and Nancy wonder, however, if this an under-reported bird. It is small, nocturnal and its calls can be confused with that of other owls. They also have a number of other questions: What percentage of the birds migrate and where do they go? Will the same birds return to their nest box this year? Is a range expansion occurring?

The image gallery below spans the “domestic” season of this pair of owls. Be sure to click on the captions–Nancy and Fredrik describe what they saw during the sleepless nights from April 1st until June 24th, 2019. The images include the female incubating, the male with prey, the nestlings peeking out at the world and the fledglings out in the woods.

Note: Click on the ℹ️to read the captions. (We recommend viewing full screen!)

Northern Saw-whet Owls are found at least seasonally throughout much of North America but they have not been extensively recorded north of southern Canada and Alaska. Especially In late winter and spring, listen for the Saw-whet's persistent call, though be aware of other owls that it could be confused with. Their preferred habitats include coniferous and deciduous forests, but they will also nest in other habitats. They are cavity nesters who take to nest boxes well.

You can contribute to what we know about their range and distribution by posting your sightings on eBird. Or build a nest box and see what happens!

To learn more about Northern Saw-whet Owls, visit the Cornell Lab of Ornithology's Birds of North America, Audubon's Guide to North American Birds or your own favorite resources.

Visit Fredrik and Nancy's website, Wild Places, to see more photography from around the world.