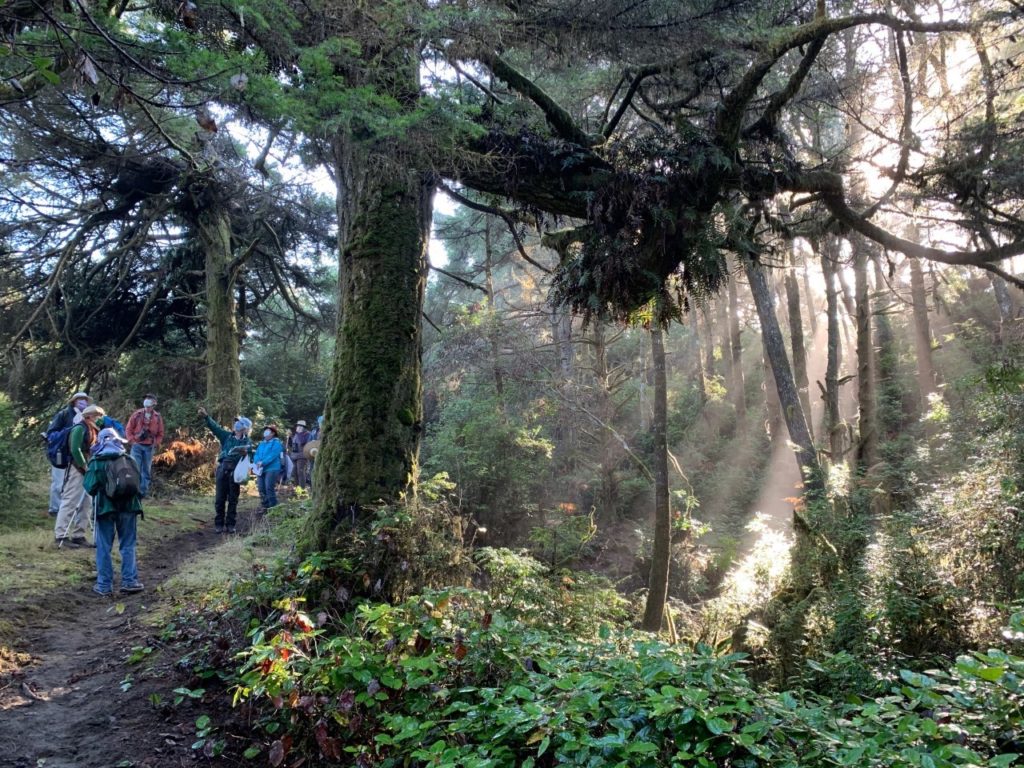 Friends of the Dunes, a non-profit in Humboldt County, California, recently helped coordinate the acquisition of a parcel of high ecological and cultural significance that spans from the shore of Humboldt Bay to the outer Pacific coast. We interviewed Mike Cipra, Executive Director of Friends of the Dunes, to learn more about this special place.

An Ecological Jewel is Conserved in Humboldt Bay

On a recent Saturday in May, Mike Cipra joined a birding group at the newly acquired Samoa Dunes and Wetlands Conservation Area on the north spit of California’s Humboldt Bay.

This opportunity wouldn’t have been possible until last October when, following twenty years of effort, the 357-acre parcel was acquired through the Samoa Dunes and Wetlands Acquisition and Restoration Partnership. The group saw 24 bird species in the various habitats on the property, including an impressive number of Olive-sided Flycatchers (Contopus cooperi), Purple Finches (Haemorhous purpureus), a nesting pair of Osprey (Pandion haliaetus), and a Ruddy Turnstone (Arenaria interpres).

While not a surprise to see the diversity of birds–the Humboldt Bay Bird Observatory has documented 293 species in a nearby area–this particular property had not been formally accessible for birding and other recreation until the land was recently purchased for habitat conservation and public access. The property was not highly attractive, or necessarily safe, for community access due to past illegal encampments and years of accumulated trash. Since purchase, Friends of the Dunes and the local community have all been helping out. In the last seven months, more than 3,000 pounds of trash have been removed from the property, and there are no longer trespass encampments.

The Samoa Dunes Partnership brought to fruition a long time conservation goal of Friends of the Dunes, the California Coastal Conservancy, the California Department of Fish and Wildlife, the Humboldt Bay Harbor District, the U.S. Fish and Wildlife Service, and other organizations and agencies who had seen the property go up for sale previously and were interested in the high value habitats it holds. The Wiyot Tribe has strong cultural ties to the land and is especially interested in the property’s native plants and culturally significant ethnobotanical resources.

An Investment by the Community

For various reasons, acquiring the property never worked out until October 2020 when the funding, opportunity and capacity aligned. Friends of the Dunes is now the interim property owner, with plans to transfer ownership to the Bureau of Land Management and the Wiyot Tribe for long-term stewardship and restoration. The investment by the land owners is only part of the story, however, as this project has wide community support from people who see the property’s potential as a haven for flora and fauna, and for people who enjoy nature. There is already a trail system in place, and the strong agency and community support will ensure that restoration and access projects get done. Friends of the Dunes, in addition to coordinating site clean ups and interim management, has been conducting naturalist-led tours of the land. The tours started out monthly but local interest has been so high that the frequency has increased to twice monthly (with Covid protocols in place).

A lot of plant associations, and habitats for birds and other wildlife, are packed into this 357 acres. There are freshwater wetlands, willow thickets, open dunes, intertidal and beach habitats, and coniferous forests, all of which provide unique niches for songbirds, raptors, shorebirds, and waterbirds, not to mention the waterfowl utilizing the associated nearshore habitats. The conservation area also has stands of mixed Sitka spruce and lodgepole pine forest, also known as Beach pine-Sitka spruce forest. This is the southern extent of this specific, uncommon and declining forest type, found only in limited areas of coastal northern California and southern Oregon. The property has beach nesting habitat for the Western Snowy Plover (Charadrius nivosus nivosus), a state-level endangered species, and the riparian habitats support species such as the Little Willow Flycatcher (Empidonax trail brewsteri) during migration.

© Friends of the Dunes

© Friends of the Dunes

The biodiversity in the new conservation area is high, thanks to the many habitats that include the outer coast, beach dunes, coniferous forest and riparian and wetland areas.

Another value of the conservation area is that it expands the contiguous stretch of publicly protected habitats along this part of the coast to more than 2,000 acres, making the north spit of Humboldt Bay the best protected, most intact native coastal dune ecosystem on the U.S. West Coast. Habitat fragmentation is one of the main drivers of species declines for birds and other wildlife, and this landmark project connects a patchwork of remarkable lands conserved over the last 40 years to the greater ecosystems of Humboldt Bay–one of the most important estuaries for birds along the Pacific Flyway.

Support for Capacity and Acquisition Brought the Project to Completion

Funding for the property acquisition was provided by the California State Coastal Conservancy, the California Wildlife Conservation Board, and the California Natural Resources Agency. Even with the acquisition funding in place, a property purchase still involves many steps and requires behind the scenes work, organizational capacity, and funds. A 2020 Pacific Birds Partnership Grant award provided support to develop the multi-party partnership and MOU, initiate clean ups and tours, and work on the details of transferring the property to its long-term owners. As Michael Bowen with the California Coastal Conservancy said, “never underestimate the power of a small grant at the right time.”

Now that the property is permanently protected, its remarkable lands, waters, trails, and habitats will be enjoyed for generations by the entire community, including the Wiyot Tribe, birders, hikers, equestrians, students and researchers from nearby Humboldt State University, and anyone wanting to experience more time in this ecological treasure.

Visit the friends of the dunes website to learn more