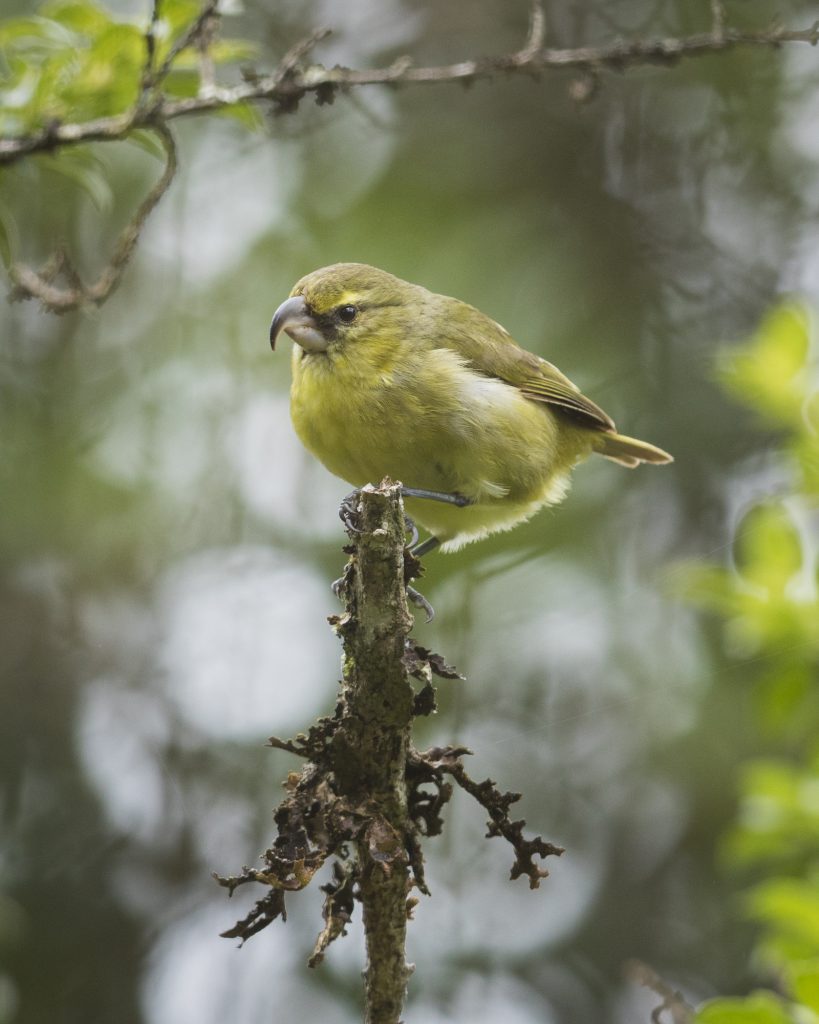 Note: We usually post more about Hawaiʻi’s waterbirds since Hawaiʻi Wetlands is one of our conservation priorities, but there is an equally compelling story playing out in the forest habitats of Hawaiʻi. Pacific Birds board member Fern Duvall contributed this post about the multiple threats to Hawaiʻi’s amazing forest avifauna and what conservationists are doing to help.

Fern is the Maui Nui (main Hawaiian Islands) Program Manager for Ecosystems Protection and Management at the Hawaii Department of Land and Natural Resources, Division of Forestry and Wildlife (DOFAW).

Hawaiʻi’s Native Honeycreepers Are In Need of Treatment

You may have heard about the U.S. Fish and Wildlife Service’s Birds of Conservation Concern list that compiles birds of conservation concern across all areas of the United States, including Hawai’i and the U.S. Pacific Islands. If species on that list can be thought of as patients in a hospital ER, awaiting treatment, there are 12 twelve species of Hawaiian forest birds in the ICU, awaiting the very last life support attempts and equipment to roll through the door, before they are forever gone!

Endemic to the Hawaiian archipelago, or in some cases to one island alone, the 12 or more songbird species on the brink of extinction in the forests of Hawaiʻi could slip away without urgent intervention–adding to the 82 species of birds already lost in the islands. One bird at the top of the treatment list is the kiwikiu or Maui Parrotbill (Pseudonester xanthrophrys): recent surveys estimate their population on Maui at fewer than 150 birds, down from over 500 in 2001. Once found on both the islands of Molokaʻi and Maui, kiwikiu are a unique honeycreeper with a parrot-like bill adapted to crack plant stems or gouge out wood to reach hidden grubs and caterpillars. This is a unique foraging method, unlike that of any other bird species globally. Partners have been working for more than a decade to try to save the kiwikiu from extinction, as described in a DOFAW press release. Part of that effort involved moving birds to the Nakula Natural Area to create a new population in restored forest habitat. (Read a recent hopeful story on that project: One Small Bird Provides Glimmer of Hope for Saving a Species.) 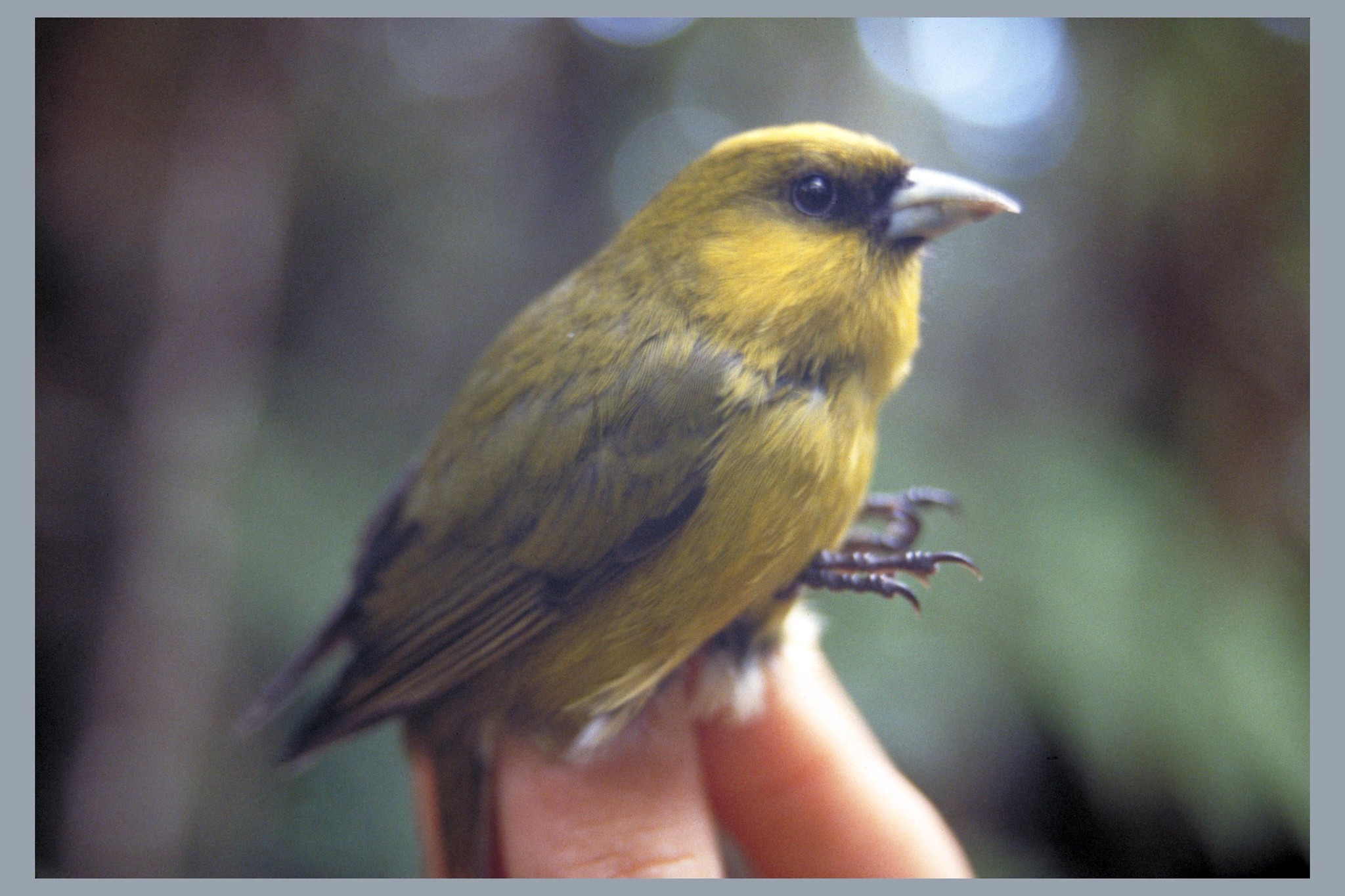 Kauai's 'akeke'e is a critically endangered species with a limited range, but may beneift from a breeding program aimed at returning birds to the forest.
Carter Atkinson / USGS

For years, Hawaiʻi’s native forest birds have faced challenges, including habitat loss and introduced predators, that have led to range contractions and population declines. They are now facing even more ominous hardships. The warming climate is pushing the birds’ foraging and nesting activities higher and higher into smaller and smaller forests. Warmer temperatures also allow introduced mosquitoes to follow the birds into these higher elevations. The mosquitoes carry and spread avian malaria, a deadly disease that most Hawaiian honeycreepers have no natural resistance to. (A single bite from a mosquito carrying avian malaria can kill an ‘iʻiwi or kiwikiu.) So the Hawaiian honeycreepers that had already been relegated to highland refuges are now threatened with mosquitoes that move higher in elevation right along with them. Climate change and introduced mosquitoes are shrinking their last safe habitats.

How You Can Help

A broad group of partners on the islands are promoting state-wide, bold actions to save Hawaiʻi’s forest birds by suppressing the populations of mosquitoes responsible for spreading avian malaria–a birth control program of sorts for mosquitoes. In association with this effort, the Birds, Not Mosquitoes initiative is geared to informing Hawaiians about the value and beauty of the native songbirds, the severe threats to them, and the benefits and safety of controlling non-native mosquitoes to save native birds.

You can help by learning about what these endangered forest birds need to recover and thrive in a changing Hawaiian world. The Maui Forest Bird Recovery Project, the Kauaʻi Forest Bird Recovery Project, the U.S. Fish and Wildlife Service, the State of Hawaiʻi DLNR, Division of Foresty and Wildlife and the American Bird Conservancy all have information about the birds, the challenges they face, and ways you can help. Follow the links below to get started.

Hawaiʻi Department of Land and Natural Resources, Division of Forestry and Wildlife – A New Tool to Save Hawaiʻi’s Forest Birds, Mosquito Birth Control