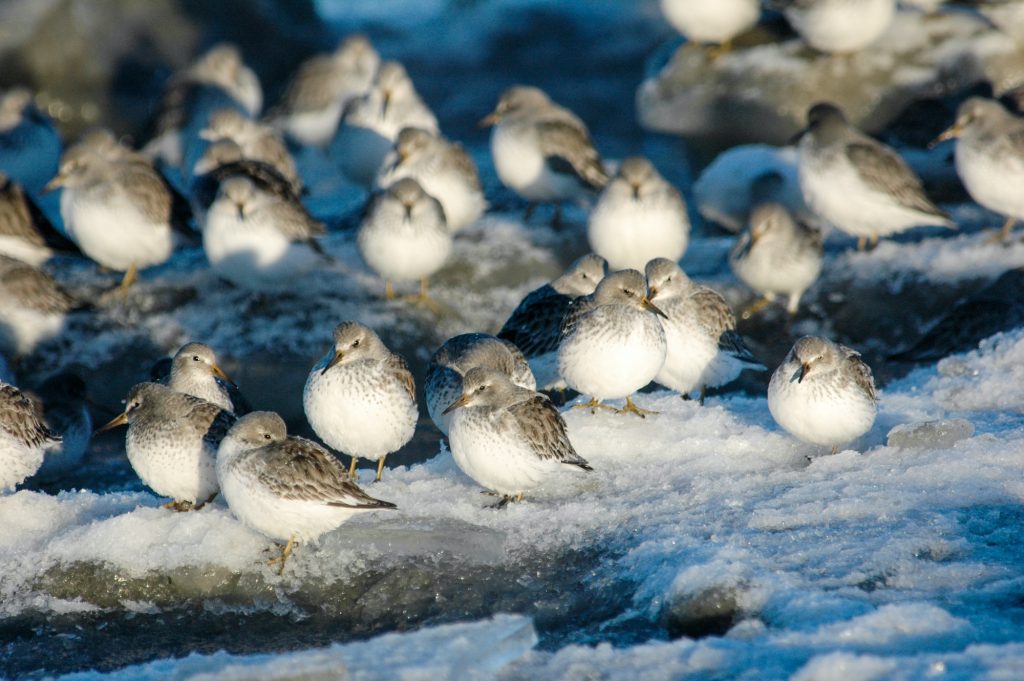 The Kasilof River is one of the most ecologically significant rivers on Alaska’s famous Kenai Peninsula. Its glacially-colored turquoise waters connect the Gulf of Alaska to the 73,400-acre Tustumena Lake and the Harding Icefield high in the Kenai Mountains.

At its mouth, the Kasilof River Flats Important Bird Area (IBA)—one of Audubon Society’s global-priority IBAs—is a rich estuarine delta. The estuary and near-shore areas provide habitat for seabirds, while tidal ponds and sloughs provide important stopover feeding areas for migrant waterfowl and shorebirds. An astonishing 165 bird species have been observed in the Kasilof River Flats, including 37 identified by the Alaska Department of Fish and Game as Species of Greatest Conservation Need.

In recent years, it’s been discovered that the saltwater mud flats on the bank of the Kasilof River are critical areas for wintering Rock Sandpipers. At low tide the waterline retreats, exposing silty muck laden with small clams and polychaete worms. At high tide the Rock Sandpipers retreat upriver or out onto floating icebergs near the mouth of the river. Cook Inlet Rock Sandpiper habitat is the northernmost wintering grounds of any North Pacific shorebird. These birds survive the harsh winter conditions because of the unique feeding opportunities presented by intertidal mudflats.

More broadly, the habitats of the Kasilof River Flats are part of the Pacific Flyway. In the summer thousands of seabirds nest in the coastal areas of the Kenai Peninsula. Nesting concentrations of common murres, puffins, kittiwakes, auklets, cormorants, and other seabirds can number in the tens of thousands.

In 2021, The Conservation Fund took the initiative to further protect this extraordinary habitat and purchased the largest remaining private property on the Kasilof River. Known locally as the “Dinosaur Parcel” for its unique shape, the 309-acre tract makes up 20% of the Kasilof River Flats IBA and contains 2.25 miles of the river’s shoreline. Their ownership temporarily eliminates any threats of harm or development, but the land is still in need of permanent protection. The Conservation Fund is working in partnership with the State of Alaska to add the property to the state park system and ensure its important habitats are preserved forever. To date, the project has received generous support from the U.S. Fish and Wildlife Service, the National Fish and Wildlife Foundation, and Conoco Phillips. The project also received a boost when awarded a Pacific Birds Partnership Grant.