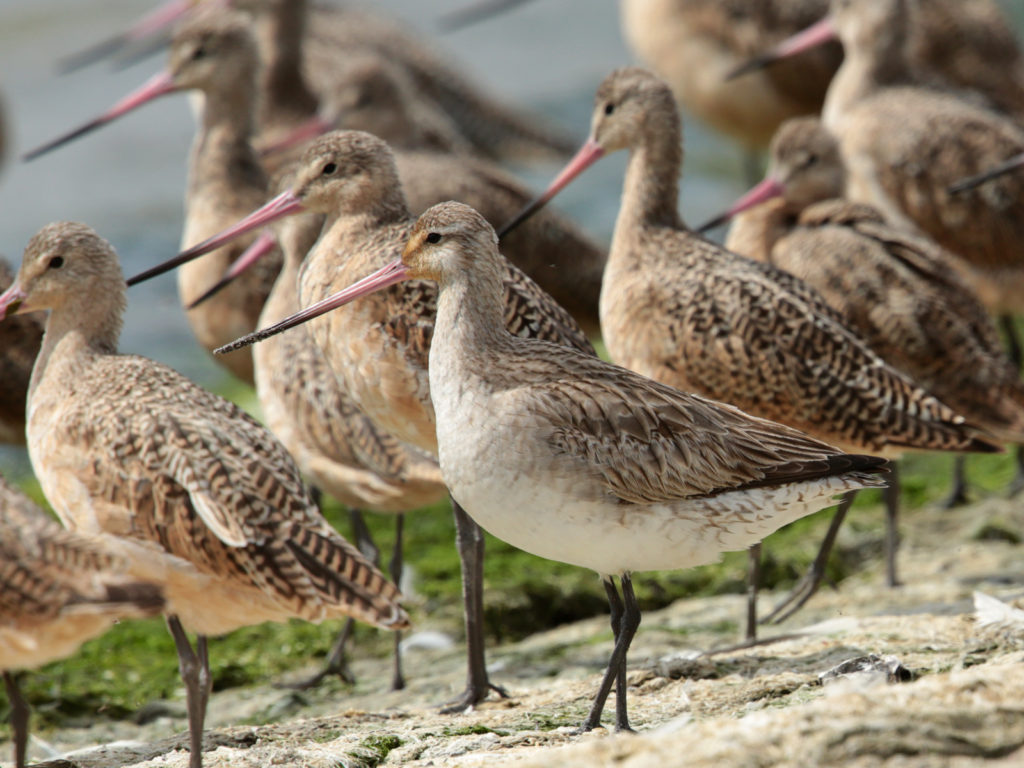 Editor's Note: The East Asian-Australasian Flyway (EAAF) is one of eight broad shorebird flyways across the world, and one of several flyways within Pacific Birds Habitat Joint Venture. Researchers have begun to better understand the migratory routes of birds using the EAAF, thanks to technology that allows researchers to track birds across lengthy migration routes. The Yellow Sea, bordering China and North and South Korea, is one of the areas of highest concern along the flyway, due to dramatic habitat alteration.

Dr. Richard Fuller, University of Queensland, Australia contributed this story from the wintering grounds of the Bar-tailed Godwit. You can learn more about Dr. Fuller’s work, and the work of researchers in the Northern Hemisphere, by following the links at the end of this article.

Many migratory shorebirds that breed in Alaska migrate along the East Asian-Australasian Flyway, rather than the Pacific Americas Flyway. In Australia, we have recently discovered declines of staggering severity and rapidity in Australia’s migratory shorebirds, with some populations crashing by up to 80% in the past 20 years. One species of concern is the Bar-tailed Godwit (Limosa lipponica), which breeds in Alaska and Siberia and winters (mainly) in Australia and New Zealand. There are two subspecies of Bar-tailed Godwits that make this journey. The “eastern subspecies” (L.l. baueri) migrates non-stop from Alaska to eastern Australia and New Zealand in the southerly direction, but stops over at the Yellow Sea on its northern migration.

Concerns from the Yellow Sea

At the University of Queensland, PhD student Nick Murray developed a remote sensing method to assess change over about 4,000 kilometres of the Yellow Sea coastline. He discovered extensive losses of tidal mud flats. The analysis revealed that 28% of tidal flats existing in the 1980s had disappeared by the late-2000s. Moreover, reference to historical maps suggests that up to 65% of Yellow Sea tidal flats have been lost since the 1950s. As well as land reclamation, large declines in sediment flows due to dams along the region’s major rivers could be having a big impact, with some tidal flats simply disappearing over the past few decades.

With the Yellow Sea region forecast to be a global hotspot of urban expansion, coastal development must urgently pursue a course that minimizes ecosystem loss and protects remaining coastal ecosystems. We have also discovered that sea-level rise will inundate 23-40% of intertidal habitat along our shorebirds’ migration routes, causing yet additional challenges during migration. We believe that an effective conservation strategy must manage the complex economic, social and economic tradeoffs that drive coastal development. We urge decision-making that simultaneously plans for coastal development, and conservation, along the world’s most rapidly developing shores.

About the Fuller Lab