Pacific Birds partners often ask about how to identify and steward conservation lands that will benefit birds. While there are a number of available resources available at the state or provincial level, a few international initiatives help show a broader and more connected picture of sites important to migratory birds throughout their life cycles. Three of these initiatives are the Important Bird and Biodiversity Areas (IBA) program, the Western Shorebird Reserve Network (WHSRN), and the Ramsar Convention on Wetlands (Ramsar). 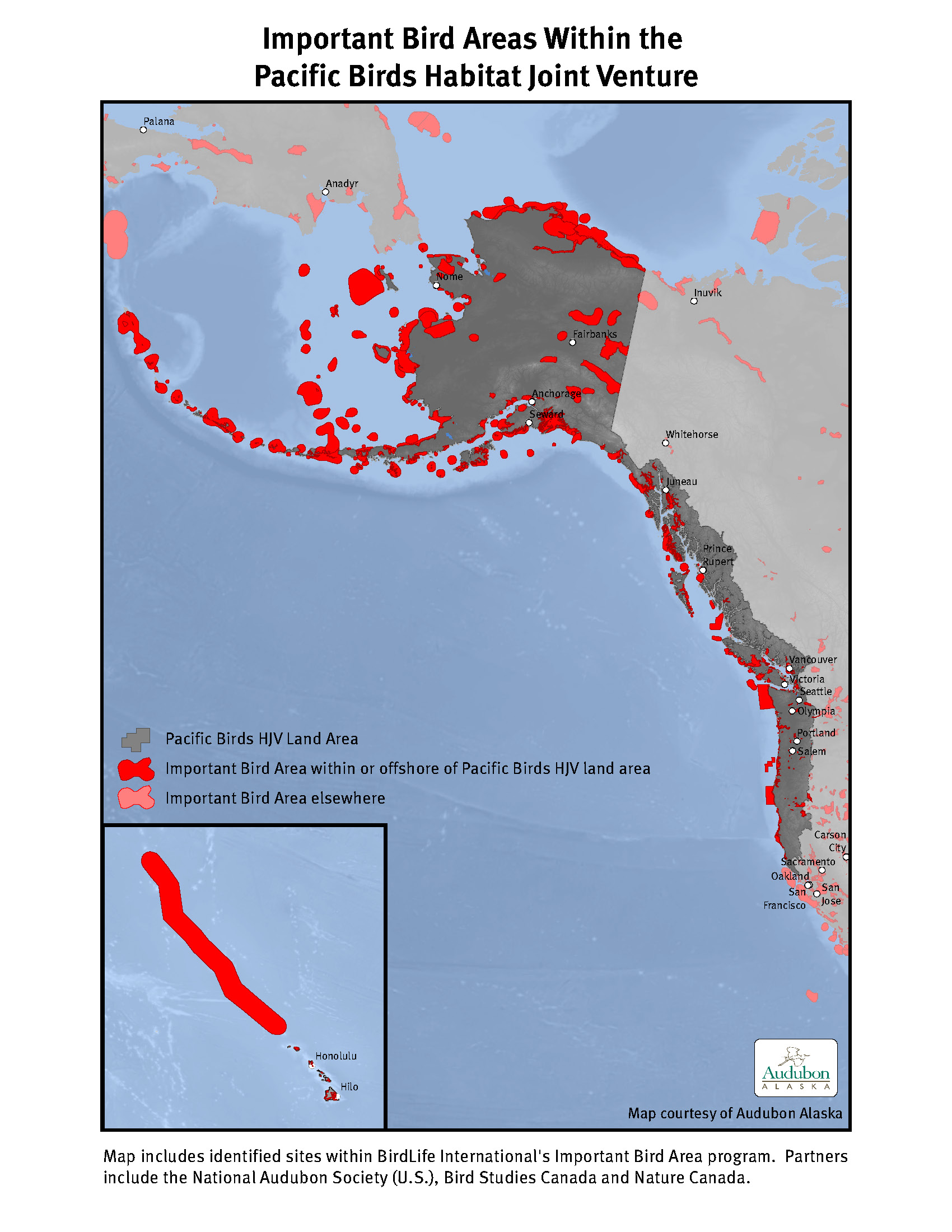 In 2014, Audubon Alaska created a map to show Pacific Birds partners the extent of Important Bird Areas within our region. The National Audubon Society is the U.S. lead partner for BirdLife International’s Important Bird and Biodiversity Area Program, and in Canada the implementing partners are Bird Studies Canada and Nature Canada. BirdLife’s IBA program has identified about 12,000 IBAs in the world; within the boundaries of Pacific Birds, there are 463 IBAs on land and within proximate marine areas. Although IBAs do not have regulatory mandates, they can provide an important focus for partner fundraising and avian conservation activities at the local level. Both the United States and Canada partner websites provide information about the birds and habitats within the designated sites.

In addition to IBAs, other programs help point to habitats and locations critical to birds. The Western Hemisphere Shorebird Reserve Network (WHSRN) has built a network of international sites used by shorebirds across their ranges. As with IBAs, there are no regulatory mandates associated with WHSRN sites, but to become a site the landowners must agree to protect and manage shorebird habitat, and conservation of shorebirds should be a priority. There are 11 established sites within the Pacific Birds region, but more importantly those sites are part of a larger network across the hemisphere. WHSRN has also developed conservation plans for individual shorebird species, such as the Conservation Plan for the Dunlin with Breeding Populations in North America. Among many other things, the species conservation plans show sites important to this species across their life cycles.

Another international program that identifies key habitats is The Convention on Wetlands, or the Ramsar Convention (Ramsar).  This intergovernmental treaty guides the conservation of critical wetlands worldwide. Ramsar is comprised of parties that commit to sustaining biodiversity or restoring wetlands of global importance. Pacific Birds has three sites on the Ramsar List: the Kawainui and Hamakua Marsh Complex in Hawaii,   Izembeck Lagoon in Alaska, and the Fraser River Delta.  Kawainui Marsh, located within a caldera, is Hawaii’s largest emergent wetland and is habitat for several endangered waterbirds. Izembeck Lagoon is host to one of the world’s largest beds of eelgrass, a primary food source for waterfowl.  Key sites within the Fraser River Delta provide critical migratory stopover areas for waterfowl and shorebirds such as the Lesser Snow Goose and Western Sandpiper.

While each international initiative has select criteria for inclusion as a designated site, there are a number of areas within the Pacific Birds region that are identified by more than one program. The Fraser River Delta is a good example. The variety of ecosystems within the Delta collectively support huge numbers of waterfowl and shorebirds, as well as many other fish and wildlife species. The Fraser River Delta is considered an “IBA in Danger“, one of 356 sites globally that face high threats and are considered to be in need of urgent conservation action. In addition, more than 50,000 acres within the Delta are designated as a Ramsar site. It is also a WHSRN site, due to several million shorebirds migrating through the estuary and tens of thousands of shorebirds that overwinter.  While habitat conservation actions occur at the local level, the international initiatives that have designated the Fraser River Delta and other sites as important help give these localized efforts a hemispheric or global perspective.