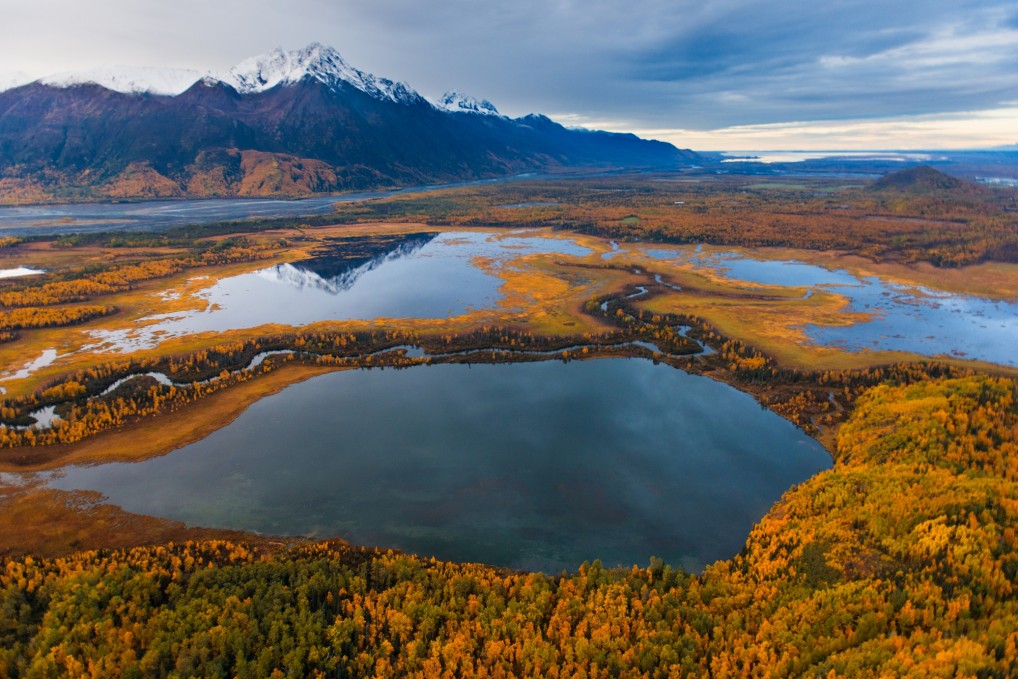 Despite its distinction as the largest state, Alaska is home to only a few of the nation’s more than 1700 land trusts. Since Kachemak Heritage Land Trust was established as Alaska’s first land trust in 1989, six additional trusts have opened their doors. Alaska’s remoteness, relatively recent statehood and low population density help explain why it is home to so few land trusts. Even though they are few in number, the land trusts have been very successful in the past 25 years, conserving approximately 40,000 acres of wildlife habitat and recreational and subsistence lands.

The complicated mix of land ownership in Alaska adds another component to the Alaska land trust story. A large percentage of Alaska’s land is in federal or state ownership. Nonetheless, there are significant habitat protection challenges and needs. Alaska is experiencing pronounced habitat changes due to climate change, and faces threats from urbanization and large-scale resource extraction. Most of Alaska’s private lands are under Native ownership, presenting unique opportunities for conservation in areas rich in wildlife and high in cultural and subsistence values. The remaining private lands are concentrated in rapidly developing areas along Alaska’s limited road system. 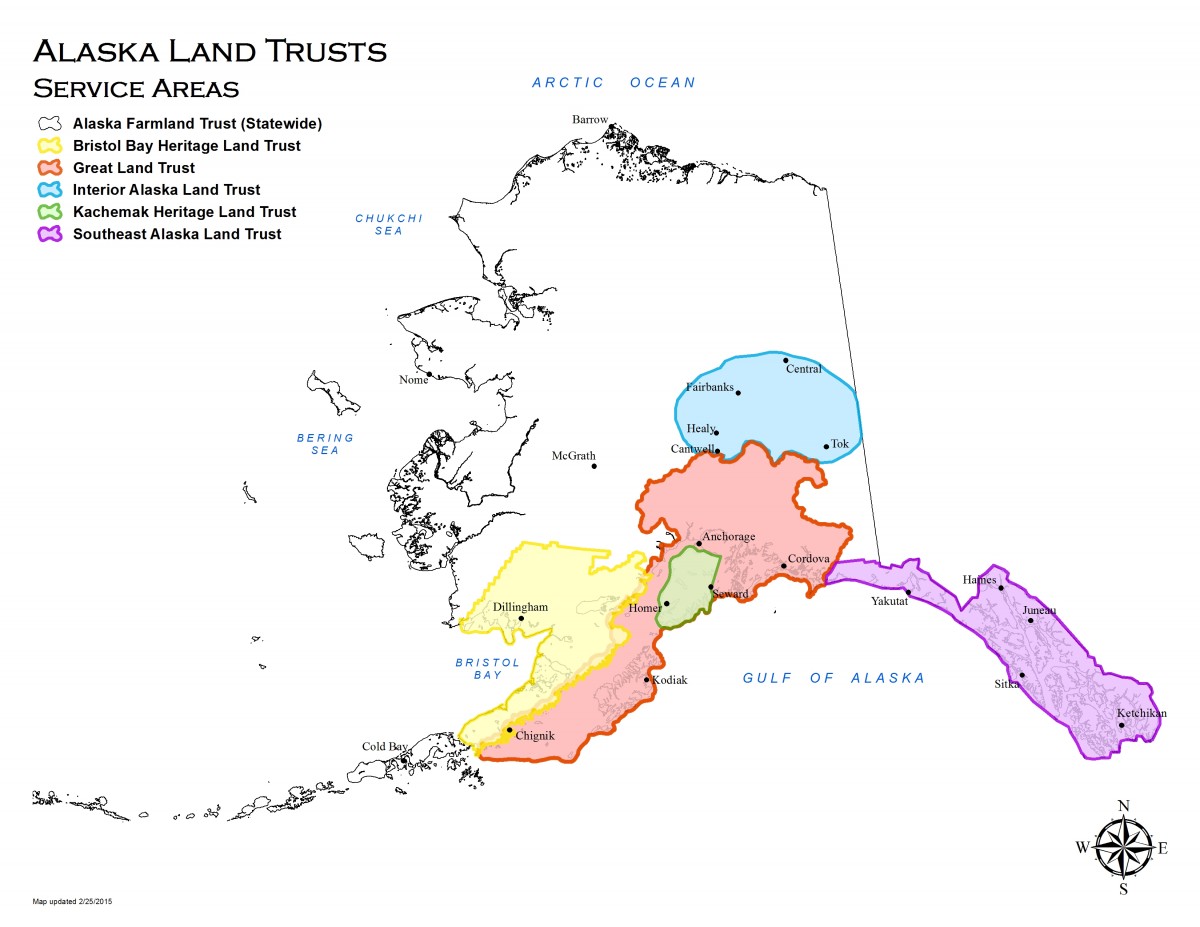 Other than the Farmland Trust and the Alaska Native Conservancy Trust, which are statewide, Alaska’s land trusts have a cumulative service area of about 171 million acres of land, spanning thousands of miles and diverse ecoregions. Kachemak Heritage Land Trust (KHLT) serves the Kenai Peninsula, about the size of Massachusetts. It is a land of boreal wetlands and forest, glacial ice fields and tundra, and biologically rich riverine and coastal habitats. With its proximity to Anchorage, the Peninsula is very popular for fishing, birding and other recreational pursuits.

KHLT and partners have been proactively conserving lands along the Anchor River for years, and are beginning to enact landscape scale protection of other rivers on the western Peninsula. In addition to conserving river corridors, KHLT has conserved a variety of properties and habitats in the Kachemak Bay area, some of which are managed for active use by the community. The Land Trust is also working with Audubon Alaska to identify lands important to species on the Alaska Watch List.

Volunteers formed KHLT in 1989, about the same time the State of Alaska enacted the Uniform Conservation Easement Act, which enabled land trusts and certain other entities to hold conservation easements. In the words of Marie McCarty, the Executive Director of the Land Trust, “In the past 25 years we have protected more than 3,200 acres of irreplaceable and unique lands, and have worked with partners to protect many more. With each project comes the responsibility to carefully evaluate and maintain the conservation values of these properties for the community — forever.”

The Interior Alaska Land Trust is currently working with the U.S. Fish and Wildlife Service to restore aquatic and riparian habitat to approximately 5.5 miles of Cripple Creek, a salmon stream that was diverted for mining in the 1930s. Cripple Creek is a tributary of the Chena River, which is one of the most important tributaries of the Yukon River for king salmon spawning habitat. The Interior Alaska Land Trust recognizes the public support for trails, open space and wildlife habitat, and hopes to continue to identify and conserve high value undeveloped lands.

Great Land Trust (GLT) began as Southcentral Alaska’s land trust, but recently significantly expanded their service area to include the Copper River Basin, Prince William Sound and much of the coastal land around the Gulf of Alaska. For twenty years, GLT has protected lands in Anchorage and the Matanuska-Susitna Borough, prioritizing lands that have high habitat values for wildlife and recreation. A key initiative of GLT is to conserve all 19 estuaries in Upper Knik Arm. The Land Trust has worked in concert with partners to prioritize and protect 11,000 acres in Upper Cook Inlet. Many of these conserved lands are wetlands within or near refuges that Audubon Alaska has identified as Important Bird Areas. GLT is also working to secure conservation lands on the Kodiak Archipelago and other locations within their expanded boundaries.

At the heart of GLT’s mission is the identification of lands that merit conservation because of their ecological and community value. Located in the most populated region in Alaska, GLT recognizes the important role land trusts can play in conserving the lands that support the Alaskan lifestyle. As Kim Sollien, Director of the Mat-Su Program says, “Land trusts are in a unique position to offer solutions to potential development issues. We can offer real estate transaction expertise, GIS, and other resources that help move beneficial projects forward.”

Southeast Alaska Land Trust (SEAL Trust) was founded by a group of dedicated volunteers with a vision to preserve the natural heritage of Southeast Alaska. Consisting of nearly 22.5 million acres, Southeast Alaska is made up of both mainland coastline as well as hundreds of islands, known as the Alexander Archipelago. Based in Juneau, SEAL Trust has now conserved more than 3,300 acres within Alaska’s Pacific coastal temperate rainforest.

In 2009, SEAL Trust began to focus its efforts on protecting lands adjacent to the Mendenhall Wetlands State Game Refuge as part of their accreted lands project. This unique project has arisen due to the retreat of coastal glaciers and the rebound of land – essentially creating new land and conservation opportunities. About a dozen parcels adjacent to the Mendenhall Refuge have been conserved to date. The 3,700-acre Mendenhall Refuge is the third largest salt-water tidal marsh in Southeast Alaska and provides vital habitat to both resident birds and migrants traveling to and from their Arctic breeding areas. In 2007 the Mendenhall Wetlands was officially recognized as a globally significant Important Bird Area (IBA).

Over the last 20 years, SEAL Trust has grown from an all-volunteer organization to one with a small professional staff. Allison Gillum, who recently took over as the Executive Director, reflected, “It is such an exciting time for SEAL Trust. We have a long history of committed volunteers and staff who have laid a strong foundation on which to build. Due to the geography here, it can be a challenge to have a presence in the many different and unique communities around Southeast Alaska. It is our goal to continue to expand our conservation efforts and work to protect the most important natural, recreational, and cultural landscapes throughout our region.”

In Southwest Alaska, Bristol Bay Heritage Land Trust has been working since 2000 to conserve the wildlife and heritage rich lands within the seven million acre Bristol Bay watershed. Bristol Bay is world renowned for its fisheries and is one of the most biologically rich areas in the state for birds. The Land Trust was the recent recipient of the National Land Trust Excellence Award from the national Land Trust Alliance, and has otherwise been recognized for its work in land conservation, water quality assessment and community outreach.

The Land Trust owns or holds conservation easements along several rivers in the Bristol Bay drainage. They have worked with a suite of partners including national conservation organizations, watershed groups, federal and state agencies, village corporations, and Alaska Regional Native Corporations. They works with partners to conserve lands within and adjacent to existing conservation units, such as Wood-Tikchik State Park, and they are working to conserve the subsistence and wildlife values of lands that were selected as part of the Alaska Native Claims Settlement Act.

The Native Conservancy Land Trust was formed in 2003 and is unique in Alaska in working both across the state and nationwide. Its mission is to support Indigenous people’s efforts to preserve, repatriate and restore ancestral lands through the establishment of Indigenous land conservation trusts. Currently it is in the process of working with other Indigenous land trusts around the country, and the Land Trust Alliance, to form a networking framework for Native-based land trusts. Since early 2012, Native Conservancy Founder and Executive Director Dune Lankard has been influential in convening native-led land conservancies around the country that have been working to establish this networking framework. Their goal is to support, strengthen and promote the cultural conservation and stewardship initiatives of Indigenous Native Peoples’ land trusts and conservancies, in order to protect and preserve traditional resources and ways of life.

Alaska’s newest land trust is the Alaska Farmland Trust (AFT), which was founded in 2006 to protect agricultural land for future generations and to support local farmers. So far, their projects have been concentrated in the agriculturally rich and rapidly urbanizing Matanuska-Susitna Valley. AFT’s first conservation easement was on a 40-acre parcel in Upper Cook Inlet that not only has prime agricultural soils, but it used as breeding and stopover habitat for migratory and resident birds. This summer, the parcel is home to a nesting pair of Sandhill Cranes and two colts. In addition to preserving farmland through conservation easements, AFT helps connect farmers looking for land to farm with landowners who have such land. They also host workshops on a variety of agriculture-related business topics, and work to promote local food and food infrastructure throughout the state.

Alaska’s land trusts work with multiple private and public partners on a daily basis. Over the years, a number of conservation projects came to fruition in partnership with The Conservation Fund or The Nature Conservancy, who don’t generally hold land or easements but may act to identify, initiate or broker projects. All of Alaska’s land trusts and conservation partners are working to collectively influence the conserved lands picture in Alaska, and the trusts are beginning to work more collaboratively despite the distances between them. Collectively, they have protected thousands of acres that support the habitat goals of Pacific Birds, and all indications are that they will continue to make enormous contributions to the conservation landscape in Alaska.