Pacific Barrow’s Goldeneye is a sea duck that spends half its life on the coast and the other half far from the sea. Most of the Pacific population of Barrow’s Goldeneye winters along coastal Alaska and British Columbia. Biologists have known that the birds move inland for part of their annual cycle, but information was lacking on the linkages between specific wintering, breeding and molting areas. Recent studies are helping to fill these information gaps and identify key habitats vital to the population. 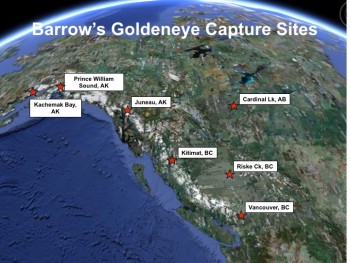 In order to better understand these linkages, and how the sub-populations of Pacific Barrow’s Goldeneyes are connected, researchers are using satellite telemetry to follow the migratory paths of birds over their entire annual cycle. Birds that winter from Vancouver, British Columbia to Southcentral Alaska have been tagged, tracked, and mapped, yielding invaluable information about their movement patterns.

In spring, birds that winter on the Pacific Coast of Alaska and British Columbia move inland to breed on freshwater lakes and ponds that are surrounded by trees with suitable nesting cavities. Females that raise a brood remain on the same wetlands to complete their molt, while unsuccessful hens migrate several hundred kilometers to the north. Males undertake an even longer distance migration to complete their body and wing molt, flying up to 2,000 kilometers to lakes in Alberta and the Yukon and Northwest Territories. By November, the birds return to their traditional, coastal wintering grounds where they reconnect with their female partners and spend the next 6 months.

In Canada, the satellite telemetry studies have identified Alberta’s Cardinal Lake as a key molt site for males that winter in the Salish Sea and breed in the intermountain area of British Columbia. This was a significant discovery as Cardinal Lake is now considered to support the densest congregation of molting male Barrow’s Goldeneyes in the world, hosting 5,000-7,000 birds. The maps below show the annual movements of males marked after breeding at Riske Creek, British Columbia–from breed to molt, molt to winter, and winter to breed. Roughly 30% of the males marked at Riske Creek each year migrated to Cardinal Lake to molt.

Questions and Opportunities for Conservation

Identifying areas that are key to part of the birds’ annual cycle raises several questions. What do these lakes offer molting birds that other, closer lakes do not? What conservation actions will ensure that the birds–flightless and in high concentrations–will be protected? On Cardinal Lake, the males are feeding on invertebrates (mostly amphipods) which depend on a healthy freshwater system–which in turn will be influenced by land use decisions and impacts from a changing climate. And, just as important, what are the habitat requirements on the wintering and breeding grounds, and what are the conservation needs during these parts of their life cycle? Wintering birds face potential threats from coastal development, hydrocarbon spills and resource extraction, and breeding birds face threats from activities such as logging that might impact nesting sites.

While researchers know the answers to some of these questions, the use of new technologies such as satellite telemetry is helping to better define the distribution, movement patterns and important habitat affiliations of Pacific Barrow’s Goldeneyes and other marine birds. This information will be critical in guiding future conservation efforts.

Thanks to Sean Boyd, Research Scientist with the Wildlife Research Division, Science & Technology Branch, Environment and Climate Change Canada, for contributing to this story.

Website: Migration and Habitat Use of Pacific Barrow’s Goldeneye
Note: this site will soon be updated.