A Small Migrant With A Loud Voice 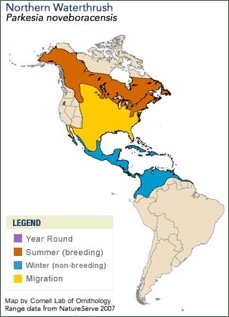 The Northern Waterthrush is a neotropical migrant that breeds in the northern U.S. and Canada and winters mostly in Central and South America. Their preferred northern habitats are wet woodlands, thickets, lakeshores and other areas near water. Although in the wood warbler family, it has some similarities with thrushes in the dull plumage, melodious song, and behavior. It is territorial both on the breeding and wintering grounds, and those of us lucky enough to hear it in the north woods will notice the males vigorously singing to find mates and defend their territories. Listen to the song of this small migrant with the loud voice.

Thier wintering habitats are also near water, mostly around mangrove swamps where they feed among the mud and exposed roots. An interesting study on the winter ecology of the Northern Waterthrush in Puerto Rico showed that, unlike most songbirds, they roosted away from their daytime feeding areas. Many individuals also returned to the same roosting sites in the second year of the study.

Northern Waterthrush is not one of the numerous neotropical migrants in peril due to population declines. However, as the discovery of roosting sites on the wintering grounds shows, there is much we don’t know about the species. Habitat alterations on both the wintering and breeding grounds are of potential conservation concern, as are the ecological shifts occurring across their range from climate change.