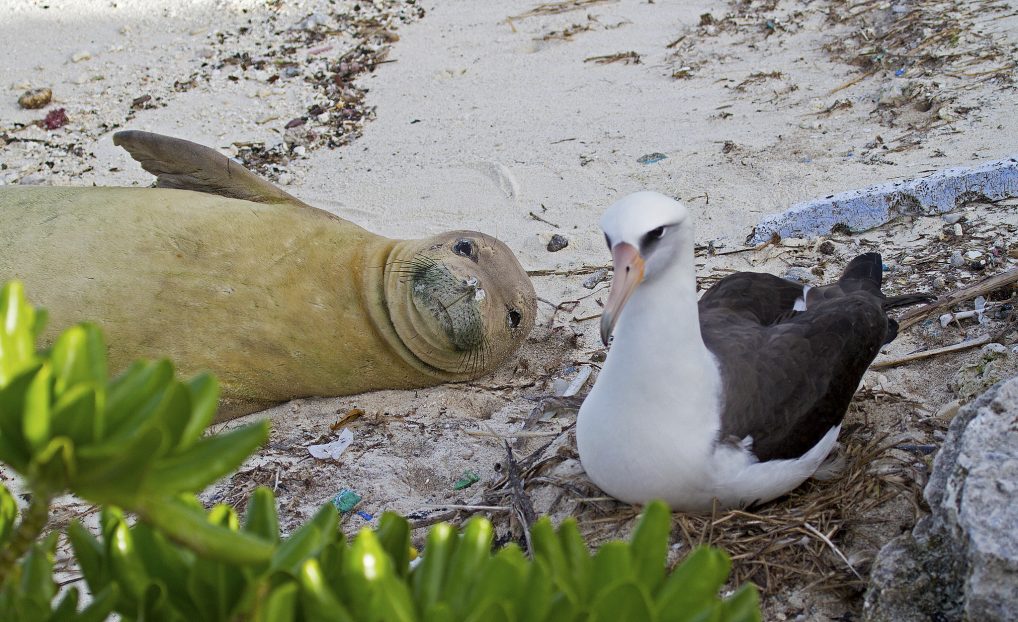 Almost all of the global population of Laysan Albatross nest in the Northwest Hawaiian Islands. The islands are also home to the critically endangered monk seal.     Photo - Dan Clark, USFWS

The recent expansion of Papahānaumokuākea Marine National Monument in the Northwest Hawaiian Islands establishes the world's largest protected marine reserve. It will further protect the region's interconnected ecosystems, comprised of deepwater and shallow habitats, coral reefs, low-lying atolls and islands. The monument is estimated to support about 7,000 species and the expansion will benefit many of these, including endemic corals, fish, marine reptiles and mammals. It will also help conserve the birds of Papahānaumokuākea.

An estimated 14 million seabirds representing more than twenty species use the monument habitats for breeding, foraging, resting, and stopping over during migration. Many of these are species of conservation concern, ranging from vulnerable to endangered. Colonies of Laysan Albatross, Black-footed Albatross, Brown Noddy and other pelagic seabirds that breed in the Northwest Hawaiian islands rely on the waters of the expanded monument to forage for their chicks. The islands and atolls also provide essential stopover habitat for shorebirds migrating through the central Pacific.  And, the islands are home to several endangered landbirds. The Laysan Finch, Nihoa Finch and Nihoa Millerbird are all found on only one or a few islands, putting their populations at risk from predators, storms, and other catastrophic events.

The national monument was created in 2006 and designated a UNESCO World Heritage Site in 2010. These designations stemmed from, among other reasons, Papahānaumokuākea's cultural and historic connections to other Pacific regions, its isolation, its biodiversity and its relatively intact ecosystems. The expanded monument area has a rich and sacred significance for the Native Hawaiian community and it will also serve as a refugia and laboratory with the onset of environmental changes resulting from climate change.

One of the themes of the IUCN World Conservation Congress currently taking place in Hawaii is the interdependence of communities across the Pacific. This is also certainly true of the resident and migratory birds that spend all or part of the year in the Northwest Hawaiian Islands; the continued existence of remote Papahānaumokuākea's birds is increasingly linked to conditions across the Pacific and the globe.