Fences, Cats and Seabirds In Hawaii 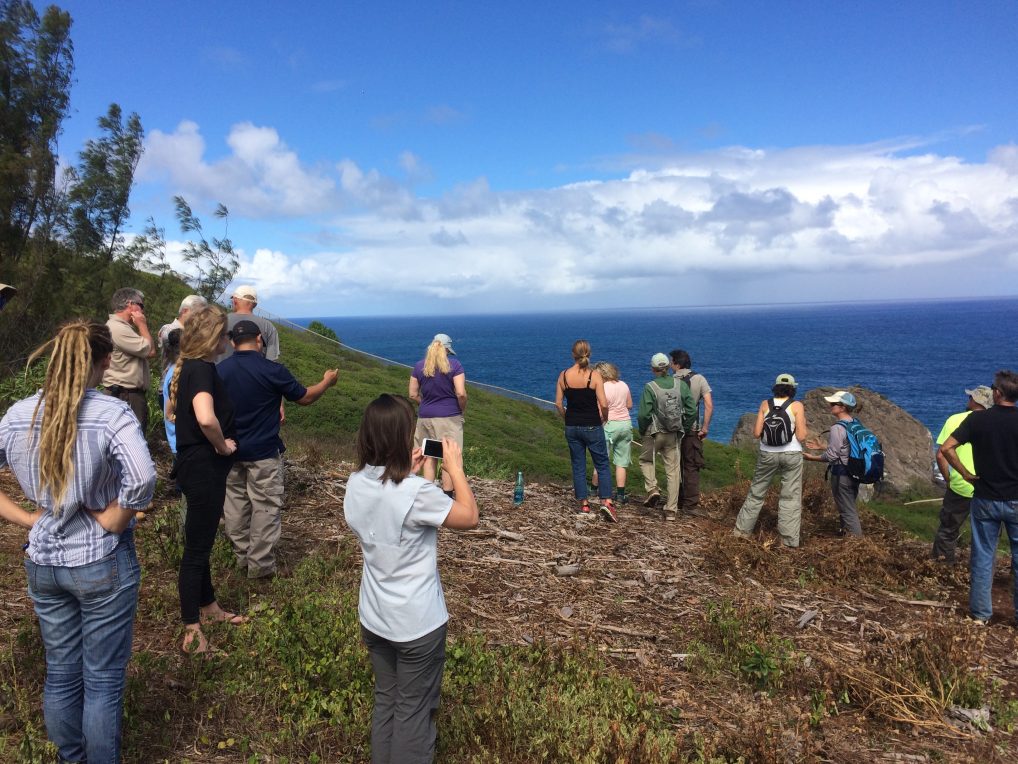 Pacific Birds partners convened on the island of Kauaʻi recently to learn about conservation strategies targeting endangered birds in Hawaii. Topics included a proposed feral cat ordinance, and translocation of the endangered ʻUaʻu, or Hawaiian Petrel. Thank you to J. Rubey, our Partnership Coordinator based in Hawaii, for providing a summary of these meeting topics.

Kauaʻi has the greatest diversity of endemic and migratory bird species in the state. Predation by feral and free-roaming cats is a major threat to nesting birds, including 12 species protected under the Endangered Species Act and 8 seabird species protected under the Migratory Bird Treaty Act. Concern over predation by cats has driven the Kauai Feral Cat Task Force to recommend that the County of Kauaʻi pass an animal control ordinance with a goal of zero feral, abandoned and stray cats on Kauaʻi by 2025. Adam Griesemer of the U.S. Fish and Wildlife Service gave partners an overview of this ordinance.

A mapping project done in preparation for the ordinance overlaid the 57 known cat colony locations over sensitive bird habitat sites. The map revealed that all cat colonies are within 1.2 km of bird habitat areas. Significantly, the monitored roaming range for the majority of cats extends well beyond that distance, reinforcing that birds are impacted even when not close to the cat colonies. Utilizing this knowledge, a draft bill has been prepared to begin phasing out existing colonies and replacing them with confined and managed cat sanctuaries. Once approved and established, this county-wide ordinance would be the first of it’s kind  in Hawaii, and possibly in the nation. See what the American Bird Conservancy says about feral cats in Hawaii.

Seabird Recovery is Critical in Hawaii

Almost a half mile in length and enclosing a 7.8-acre area, the Kīlauea Point National Wildlife Refuge’s predator-proof fence surrounds the first bird nesting sanctuary on the island of Kauaʻi. It is topped with an arched hood that extends outward, preventing cats from jumping over. Following its completion at the end of 2014, predator eradication was conducted within the confines of the enclosure and a conversion of invasive to native plant species began.

The enclosure will be a core sanctuary, and hopefully help prevent extinction, for the only two endemic marine birds nesting on the island of Kauai: the threatened ʻAʻo (Newell's Shearwater) and the endangered ʻUaʻu (Hawaiian Petrel). Both species receive heavy predation by cats and rats where they nest in the upper reaches of the mountainous island.  In 2015, Newell’s Shearwater chicks were translocated into the enclosure.

Around the time of our site visit, Hawaiian Petrel chicks were being re-homed to within the fenced area. Between helicopter flights to deliver the new youngsters, Lindsay Young of Pacific Rim Conservation let us know that Hawaiian Petrel chicks instantly imprint on their nesting site location–once they open their eyes. So one challenge was to remove the single chicks of each clutch from their original mountainous burrows and relocate them to the new fenced cliff-side sanctuary burrows –prior to their taking a look! That way the birds are sure to return to the fenced-in sanctuary when it becomes their time to breed.

Approximately 6.5 feet tall and built entirely of stainless steel to resist the harsh marine environment, the main panels of the predator-proof fence are made with mesh so fine that even mammals as small as a two-day-old mouse cannot enter. The fence is topped with an arched hood that extends outward preventing cats from jumping over.