Way Up North: Eiders In The Chukchi Sea 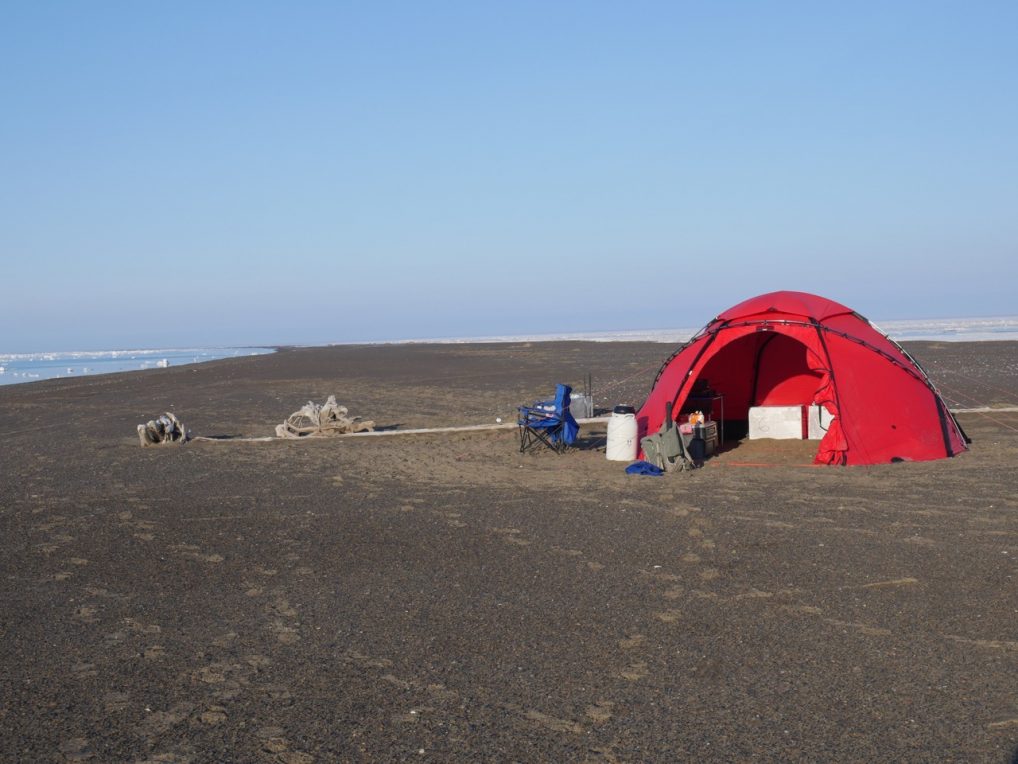 Base camp on a barrier island at Kasegaluk Lagoon.
© Stacie Evans

Thanks to Rebecca Bentzen for submitting this story. Rebecca is the Avian Research Coordinator for the Arctic Beringia Program, Wildlife Conservation Society. Arctic Beringia is one of their 15 focus areas around the globe.

Over one-third of the Chukchi coast in northwestern Alaska is protected by a chain of narrow barrier islands. Along with their associated landside lagoons, this ecosystem is vital to the birds, mammals, and fish in the region; however, they are under threat from rising seas and increased storm surges. The loss, or periodic inundation of barrier islands, in addition to the presence of new predators moving north in concert with a changing climate, creates new risks for many of the animals that live and breed along this coast.

Pacific common eiders breed on barrier islands in the Chukchi Sea, and are an important subsistence species, contributing to food security in many communities. They have also been recognized as a species of concern because of population declines and threats from climate change and disturbance. Indeed, common eiders are the highest-risk waterbird population on Alaska's North Slope, largely due to potential overwash and erosion from forecasted increases in storm surges, which could have devastating effects on barrier island nest sites.

To learn more about how, when, and where Pacific Common Eiders are nesting, Wildlife Conservation Society has implemented a nesting ecology study on the barrier islands near Icy Cape. In early June 2016, we set up a base camp on a barrier island at Kasegaluk Lagoon in the National Petroleum Reserve–Alaska. This lagoon has been designated a ‘Special Area’ due to its importance to beluga whales, polar bears, walrus, sea ducks, and shorebirds. The Kasegaluk Lagoon has the highest known abundance and diversity of bird life across all Arctic Alaska’s coastal lagoons.

Our efforts to study the breeding ecology of eiders, supported by the Wilburforce Foundation, will help prioritize specific areas along the barrier islands that are critical for the long-term health of this species as well as improve our overall understanding of this incredible part of Alaska’s coastline.

Thanks to Rebecca Bentzen for submitting this story. Rebecca is the Avian Research Coordinator for the Arctic Beringia Program, Wildlife Conservation Society. Arctic Beringia is one of their 15 focus areas around the globe.