A Forest, A Friend, And A Perspective 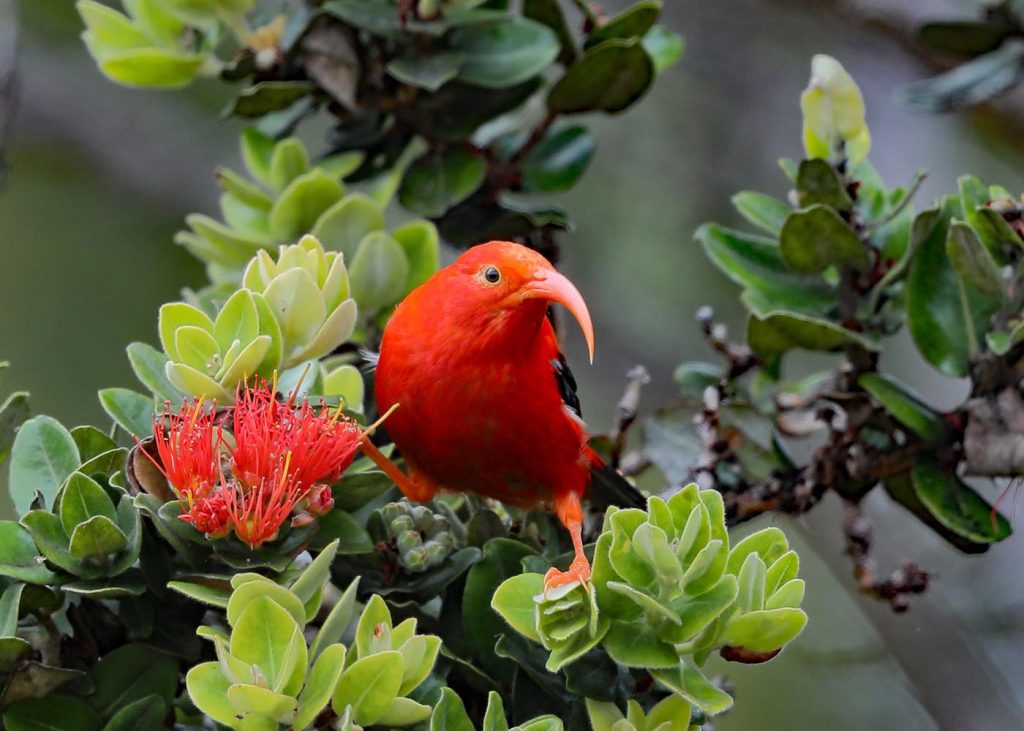 The ʻIʻiwi was recently listed as threatened under the Endangered Species Act, due to threats from diseases and its limited remaining habitat. Climate change is expected to exacerbate the problems for this Hawaiian honeycreeper, as well as other native forest birds in Hawaii. Photo © Jack Jeffrey

Thank you to Jack Jeffrey for submitting this post.

Have you ever had one of those “Aha” moments when the past and future come together in life? For me, it was when a friend, a forest, and native forest birds converged and made my life just that much better–my Aha moment! I would like to share that story. From 1990 until 2008 I was the wildlife biologist for Hakalau Forest National Wildlife Refuge on the Island of Hawaii, a refuge specifically created for protecting native forest birds and their habitat. In case you didn’t know, forest birds across the islands have been in decline since the arrival of the Polynesians to Hawaii over 1,000 years ago. During those early years habitat loss from agriculture and introduced Polynesian rats took their toll on native birds. Later, when people from other areas of the world arrived in the late 1700s, the declines hastened–due to the introduction of habitat destructive grazing cattle, goats, sheep, and pigs. (The Hawaiian Islands are so isolated, only one land mammal, a small insectivorous bat, ever got to Hawaii on its own. Grazing land mammals were a huge detriment to the island ecosystems.)

More time brought more dangers:  invasive weeds, and predators such as cats, mongoose, dogs, and more species of rats. Mosquitos and the mosquito-borne diseases, avian malaria and pox, got to the islands in the 1800s. These invasions all contributed to the decline of native birds, including eight extinctions in the 45 years I have been in Hawaii. But I digress. In 1992, a professor and friend from the University of Hawaii was teaching an Environmental Law class and called me to ask if she could bring her class to volunteer at Hakalau Forest. Once a cattle ranch, much of the upper area of the refuge had been deforested by over 100 years of cattle grazing. The class came up to the remote refuge for a volunteer weekend to plant tree seedlings. On Saturday morning, while Denise and I were having breakfast on the front porch of the volunteer cabin, in a pasture devoid of trees and birds, and enjoying the early morning sunrise,  I said to her that “someday this cabin will be in the trees, and this vast pasture will be a forest inhabited with native birds”.  “But” I said, “it won’t happen in my life time because as everyone knows, forests take a long time to grow.”

Over the years, the number of volunteer groups grew and hundreds of thousands of trees were planted. Denise continued to bring her new Environmental Law students to the refuge every year. Either myself or other staff would lead the group in the tree planting weekends. I retired in 2008. In 2014, Denise contacted me and asked if I would like to join the group for old times’ sake. We hadn’t seen each other in many years. On that Saturday morning, 22 years later, Denise and I were sitting on that same cabin porch and she asked me what birds I heard near us. “Listen,” I said “there’s an ʻI’iwi, ʻApapane, over there is an ʻElepaio, and ʻAmakihi, and there’s even the endangered ʻAkiapola’au singing about 100 yards away.” Denise asked me if I remembered what I had said the first time we had breakfast on this porch. “No,” I said “that was over 20 years ago.” “Well,” Denise told me “you said that someday this pasture would be a forest and all the birds would be here, but it wouldn’t happen in your life time...and you’re still alive!”   AHA!