A River of Raptors in Veracruz

About 1.5 million Turkey Vultures move through Veracruz each fall.

Editors Note: This is part II of a series about the migration of raptors and other birds through Veracruz, Mexico. Part I, “North America’s Busiest Flyway” can be viewed here. Stay tuned for Part III, which will consider why Veracrz is also rich with resident and migratory passerine species.

Four to six million birds move through Veracruz in the fall, en route to Central and South America. But it isn’t just raptors that make the area so compelling for birders and avian ecologists. In addition to the resident birds, hundreds of species from North America’s flyways move through Veracruz, they just reach it in different ways.

Jacob Drucker, who worked for the Mexican non-profit Pronatura counting raptors and other soaring birds in the fall of 2017, submitted this story.

Part II: A River of Raptors and Waterbirds

More than 4 million raptors make for a magical migration

The passage of soaring birds through Veracruz is a phenomenal event to observe. Soaring birds are tied to the presence of thermals and updrafts, which brings us back to that all-important landscape below the birds. The coastal plain of eastern Mexico is perfectly set up for bird-friendly thermals. Dense lowland air and plenty of sun results in an abundance of wide, warm air columns that ascend slowly. The inland Mexican Plateau is also flat and sunny, but the thinner air and more intense sun creates fewer and narrower thermals, and the air rises at a rate that makes it harder for soaring birds to control their flight. As raptors, pelicans, and storks make their way south from all over North America, following major geographic features such as the Rocky Mountains, Gulf Coast or Sierra Madre, they are ultimately pinched into a twenty mile-wide stretch of coastal plain just north of Heroica, Veracruz.

This condensed raptor migration has been known about for centuries, but was quantified for the first time in the early 1990s by local birdwatchers. The numbers they tallied—over four million raptors in a season—were so high that raptor enthusiasts and biologists were skeptical, encouraging the start of a standardized count. This count continues today, under the jurisdiction of the Mexican non-profit Pronatura. Birds are counted from two carefully positioned locations, spaced 10 kilometers apart, by three rotating teams consisting of two official counters at each site.

The benefits of a long-term data set apparent in Veracruz

Four raptor species comprise 98% of the total counted birds each season. On average, there are 250,000 Mississippi Kites, 1.5 million Broad-winged Hawks, 800,000 Swainson’s Hawks, and 1.5 million Turkey Vultures. A significant percentage of each of the these species global population migrates through Veracruz, making Pronatura’s fall monitoring efforts an effective tool to document population change over time. For example, since Pronatura’s counting began in 1992, Mississippi Kite numbers have increased, while Swainson’s Hawks have decreased. These trends reflect landscape level change in breeding habitat in North America, such as the Mississippi Kite’s northern and westward expansion. In South America, the use of rodenticides is likely affecting Swainson’s Hawks wintering in Argentina.

Fall raptor counters such as myself expect to first see the southern-breeding Mississippi Kites. Those peak the first few days of September, followed by a flight of predominantly Broad-winged Hawks, which cumulates with single flocks of over 50,000 birds in the first week of October. They are replaced by Turkey Vultures and Swainson’s Hawks as the weeks progress. Some of the largest flights ever recorded were comprised of massive numbers of Swainson’s and vultures—the largest documented bird flight in the history of the world was a product of this, totaling over one-million raptors!

An inspiring display of flight

These four species and many other soaring birds form massive, tornado-like spirals as they use rising warm air to gain elevation, then glide to the next warm air column. Both “vortexes” and “lines” of birds are awe-inspiring, with the sky seeming to boil over with raptors. The structure of these kettles and lines will vary, from walls one-hundred Broad-wingeds high by fifty deep that snake on for an hour, to sheets of polymorphic Swainson’s Hawks that wash over the landscape in infinite shades of chocolate and white. Add to these spectacles lines of American White Pelicans so perfectly spaced they look like a fleet of Imperial starships, a pink meteor-shower that is actually thousands of Scissor-tailed Flycatchers, or clouds of Franklins Gulls en route to the Pacific, and you have a fragment of a portrait of the most significant bird migration bottleneck in the world.

See the fall 2017 data from the Chichicaxtle Counting Site

See the fall 2017 data from the Cardel Counting Site 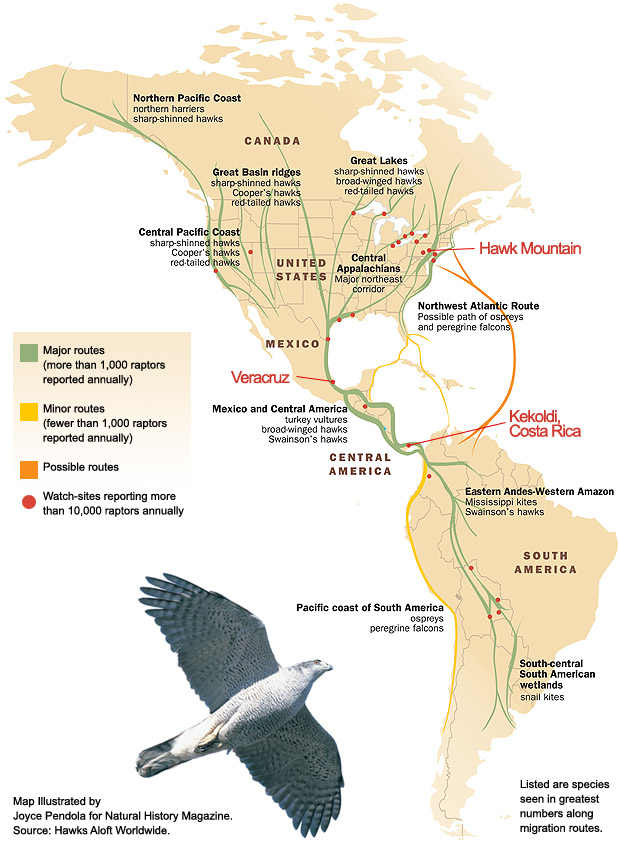 The topographic features of the North and Central American landmass force migrating raptors, other soaring birds, and many other diurnally migrating species to pass through a tiny geographic region in coastal Veracruz, Mexico, where the mountains meet the coast. 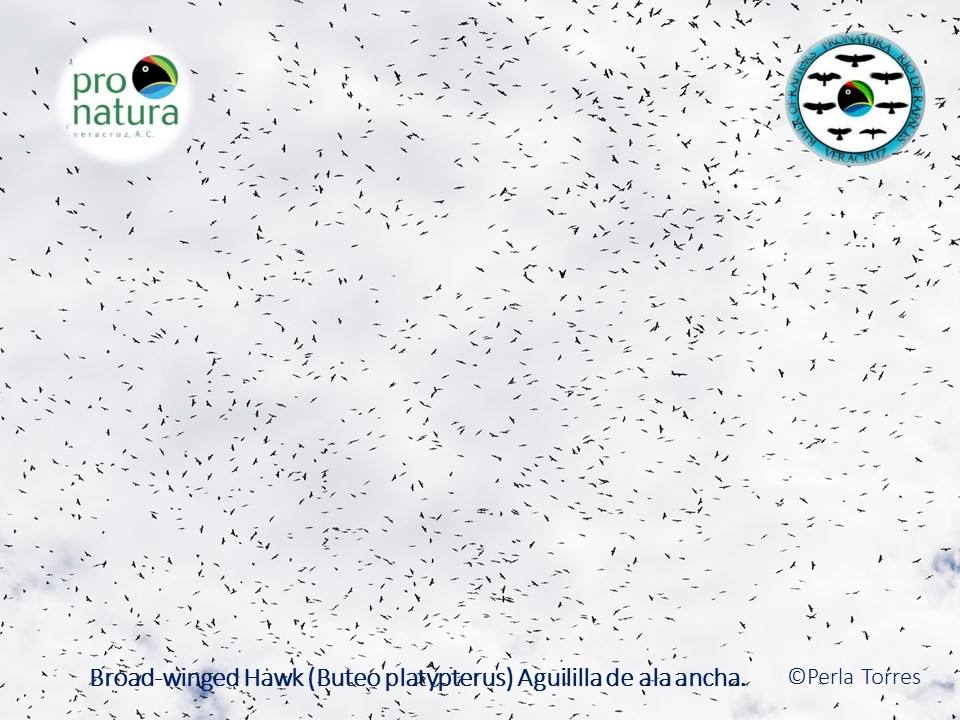 Broad-winged Hawks over the Chichicaxtle Observatory