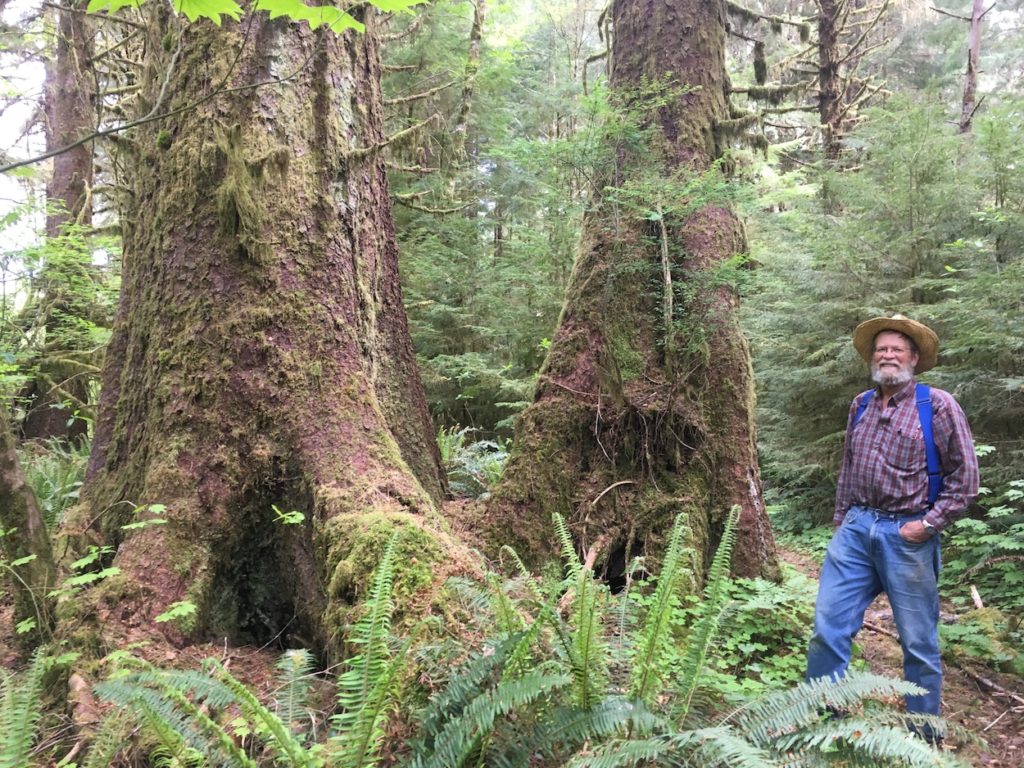 A family donation to the North Olympic Land Trust made the Calawah Conservation Area possible. Pictured: Prior landowner Jim Klahn amidst large Sitka Spruce on the property.

The Calawah Conservation Area project was completed in the fall of 2018 and was reported on our 2019 accomplishment forms. Thank you to the North Olympic Land Trust for sharing one of their conservation successes!

In the fall of 2018, the North Olympic Land Trust added a few more acres to the 3,300 it had already conserved on Washington’s North Olympic Peninsula. A 34.5 acre parcel was donated to the Land Trust and includes footage along the Calawah River where it runs through Forks, Washington.

The Calawah River originates in the Olympic Mountains. Downstream of Forks, it flows into the Bogachiel River, a tributary of the Quillayute River, which empties into the Quillayute Estuary near La Push, Washington. Salmon, steelhead and trout are found in the Calawah river system and the new Conservation Area will specifically conserve habitat for returning chinook salmon and wintering steelhead.

Between the river, the riparian habitat and the maturing coniferous forest, a diversity of fish and wildlife are likely to benefit. While bird surveys have not yet been conducted in the conservation area, there is an active Bald Eagle nest and it is potential habitat for the Northern Spotted Owl, Marbled Murrelet and Northern Goshawk that rely upon late-successional or old-growth forests.The Land Trust will partner with biologists and volunteers to learn more about the conservation values of the property and the species it supports. The land will be managed to allow for natural forest succession, important in this area where timber harvest and urban development have impacted the natural forest and river environments.

“Through this gift, the donors are helping to preserve a healthy watershed and its fisheries, leaving a conservation legacy that benefits the community and the local economy.”

According to State of the Birds 2013, about 60% of lands in the United States, or 1.43 billion acres, are privately owned. These private lands help maintain forest cover, provide habitat connectivity and contribute high-value habitats critical for birds and other wildlife. The donation and ongoing stewardship of this property helps ensure that one small piece will be putting conservation and biodiverstiy up front.