A Snapshot of the Fraser Estuary’s Avian Diversity 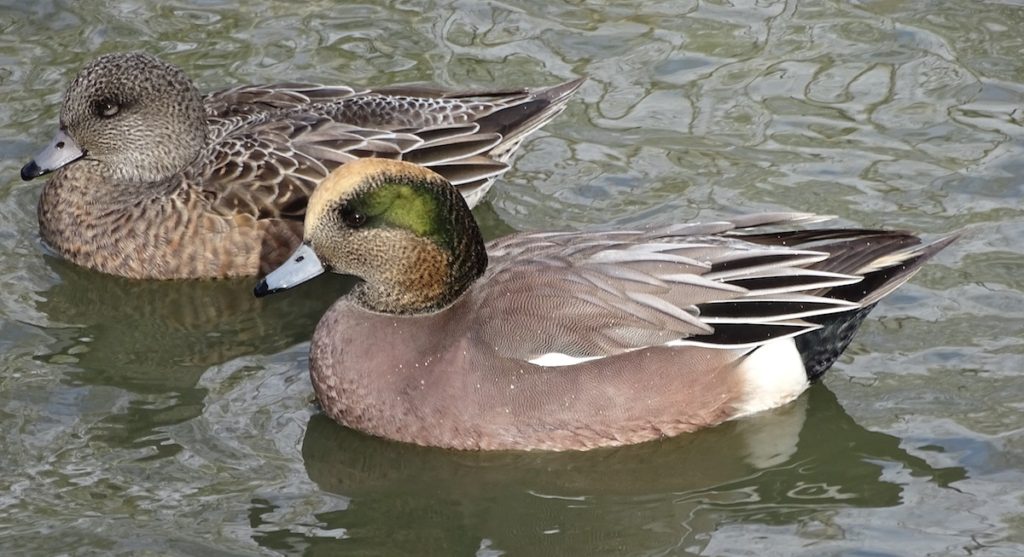 Thanks to Graham Sorenson, British Columbia Projects Coordinator with Birds Canada, for contributing this post.

The importance of the Fraser River Estuary within the Pacific Flyway

The Pacific Flyway is used by millions of shorebirds, waterfowl, raptors, and other waterbirds each spring and fall. Because of the ocean moderated climate on the Pacific coast, it is also the over-wintering location of many of these species. One of the most important stopover and wintering locations along the northern portion of the Pacific Flyway is the Fraser River Estuary in southern British Columbia. The Fraser River empties into the Salish Sea just south of Vancouver, BC, and this outflow of fresh water produces extremely productive estuarine waters, mudflats and coastal marsh habitat for waterfowl, shorebirds, gulls, and raptors. Because of this, the Fraser River Estuary is designated as an Important Bird and Biodiversity Area (IBA).

Canada’s IBA Program, run by Birds Canada (formerly Bird Studies Canada) and Nature Canada in conjunction with BirdLife International, has nearly 600 sites across the country and 86 sites in British Columbia. Important Bird and Biodiversity Areas are nominated for site designation when species counts exceed global, regional (country), or local (province, state, and subspecies) thresholds. These thresholds are generally equal to 1% of the population of that species for the specific region. In Canada, species counts that surpass 20,000 individuals are also used to designate IBAs.

Using eBird to document abundance and diversity of the IBA

On November 17, 2019, Birds Canada organized a second annual count of the entire Fraser River Estuary Important Bird Area. The goal is to provide an annual count of waterbird and raptor species present in the Fraser River Estuary and increase awareness about the importance of the estuary. (See a summary of the 2018 count.) Forty-seven birders participated in this year's count, including many local birders and two of Birds Canada’s partners at Washington Audubon. Participants focused their counting on waterbirds (such as shorebirds, waterfowl, gulls, and marsh birds) and raptors, but also documented the presence of other avian species.

All data collection was conducted through eBird Canada, primarily through the eBird app. The eBird Canada portal allows checklists to be submitted using an “IBA Canada (protocol)”, instead of the commonly used “traveling”, “stationary”, or “incidental”. This protocol tool allows all data that is submitted on the same day to be combined into species totals within IBA boundaries. This assumes observers are not double counting birds. This is managed by dividing the IBA into distinct count areas and communicating between observers about moving flocks of birds. 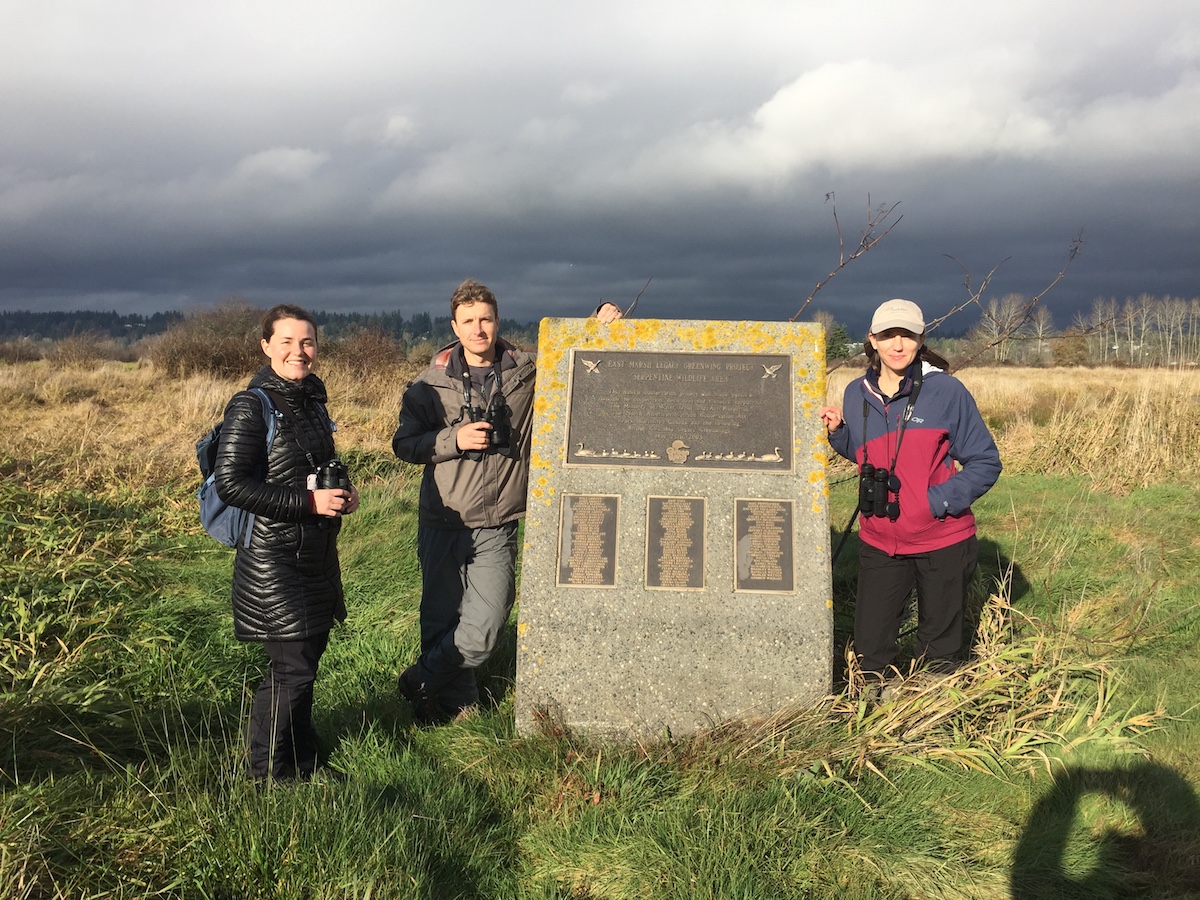 During the 2019 count, 129 species and 232,500 individuals were detected in total, highlighting the impressive winter diversity in the Fraser River Estuary. Five species of both hawks and owls were detected, as well as 345 individual Bald Eagles.

Both American Wigeon and Glaucous-winged Gull counts exceeded the global IBA threshold, Dunlin exceed the Canadian IBA threshold, and Great Blue Heron (fannini) and Peregrine Falcon (Peale’s) exceeded the IBA subspecies thresholds (see table below). Peregrine Falcons were not all identified to subspecies, but Peale’s is the common subspecies in British Columbia, so it is likely several of the individuals were Peale’s. Snow Goose and Northern Pintail totals surpassed 20,000 individuals, a significant number for Canadian IBAs. High and interesting counts of several other species can be seen below and all of the 2019 results can be found here.

The high wintering diversity and abundance of birds demonstrates the importance of this IBA during the winter months, especially in comparison with other IBAs in Canada. However, despite the wealth of biodiversity in the Fraser River Estuary, a large number of development projects are proposed and ongoing within the IBA.  Many count participants, local naturalist and environmental groups, and the public are concerned about the future of the IBA and the birds it supports. Birds Canada is working to raise awareness about the importance of this IBA through counts like this, furthering conservation and management goals within the IBA through work with partners, and by committing to outreach around the importance of birds in the Fraser River Estuary. 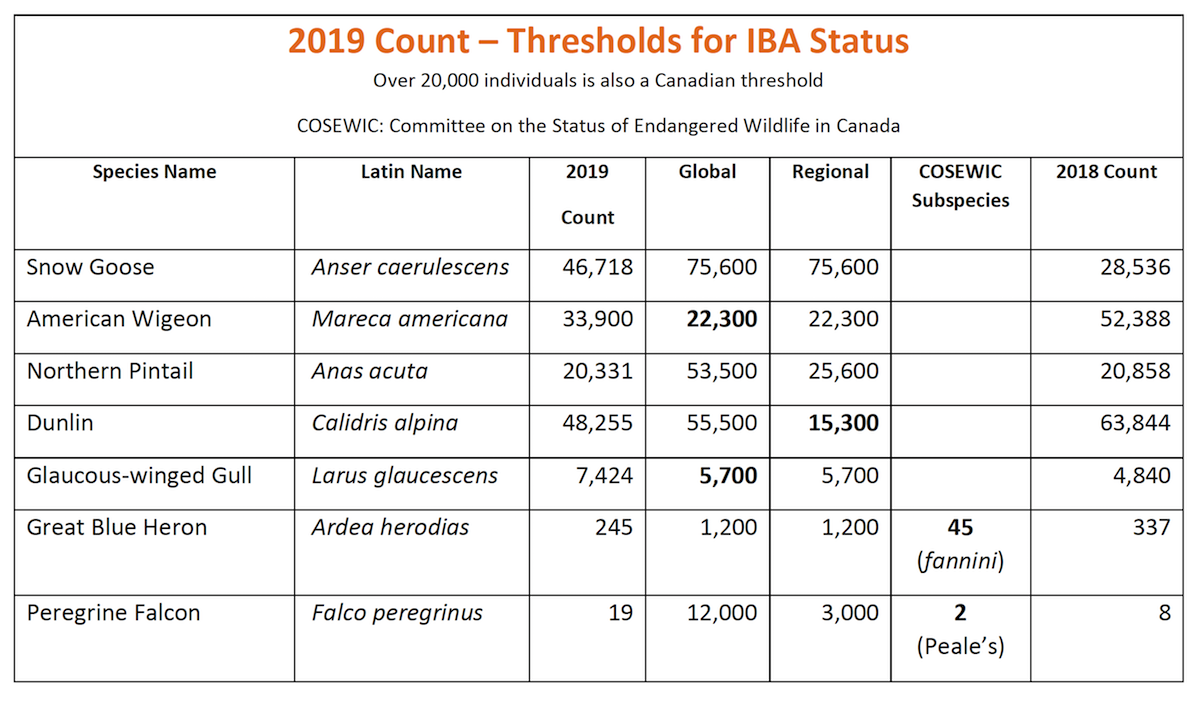