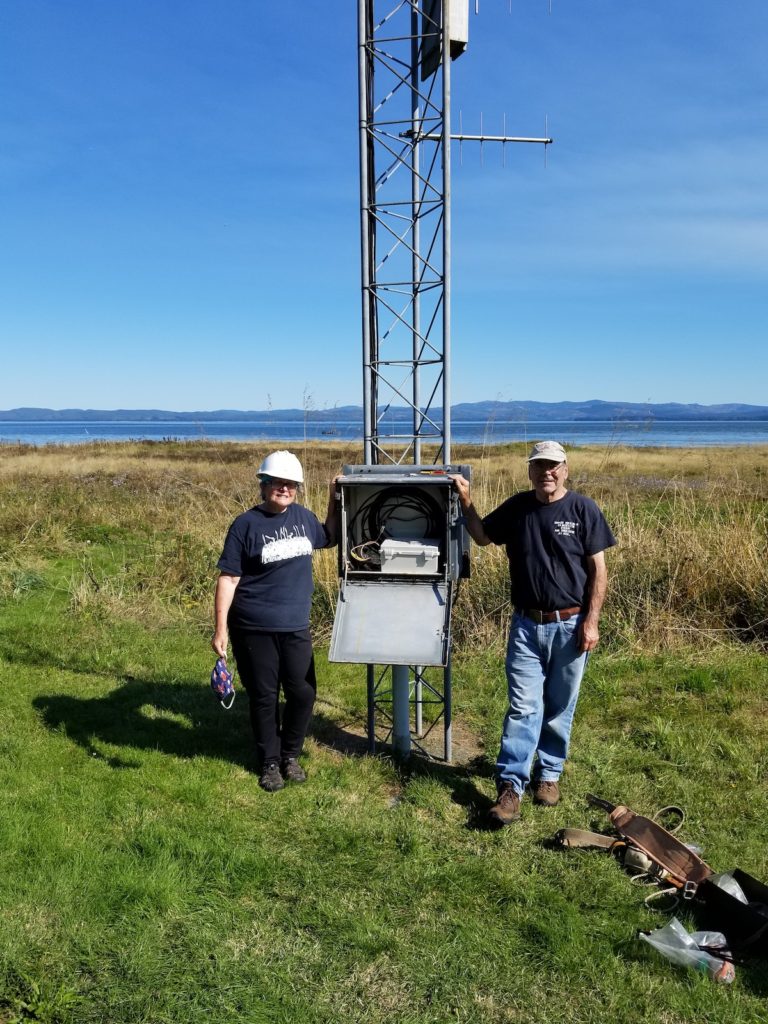 Thanks to Vanessa Loverti for submitting this post. She is the Regional Shorebird Coordinator at the U.S. Fish and Wildlife Service, Pacific Region, based in Portland, Oregon.

The Motus Wildlife Tracking System is a collaborative research network that uses coordinated automated radio telemetry arrays to study the movements of birds, bats, and insects. There has been great success with Motus research throughout the existing network globally, but there are notable gaps across the western portions of North and South America. A recent initiative led by Partners in Flight, Western Working Group hopes to expand the network in the Pacific Flyway. A new Motus station now occupies a site in Willapa Bay, targeting migratory shorebirds.

Jackie Ferrier, Refuge Project Leader at Willapa National Wildlife Refuge Complex in Washington, is well connected within her community and was able to spearhead a new addition to the network. She contacted Kathleen Sayce and Frank Wolfe, who live on the bayside in Nacotta near Willipa Bay, and asked if we could put a MOTUS tower on their property. It happens that Frank and Kathleen are both Amateur Radio Operators and already had the towers and power in place on their property, so it was an easy sell! It did not take long before they started collaborating with us on this project, and Frank was climbing the tower and mounting our Motus antennas to capture shorebirds flying by in the bay. The station is now up and running and we could not be more excited.

More Towers On the Way

The U.S. Fish and Wildlife Service Migratory Bird Program is on to our next adventure working with Kate Iaquinto, Refuge Manager at Bandon Marsh National Wildlife Refuge, and the Oregon Department of Transportation to place a tower on the Bullard Bridge. This is still pending approval but we hope to be adding another tower to the network before long.

Specific research questions at the Willapa and Bandon sites could include: arrival and departure times on breeding grounds, overwinter survival, and stopover duration. As the Motus Network in the Pacific Flyway expands, we will be able to expand our knowledge on how these sites are connected, ultimately leading to more informed conservation work.