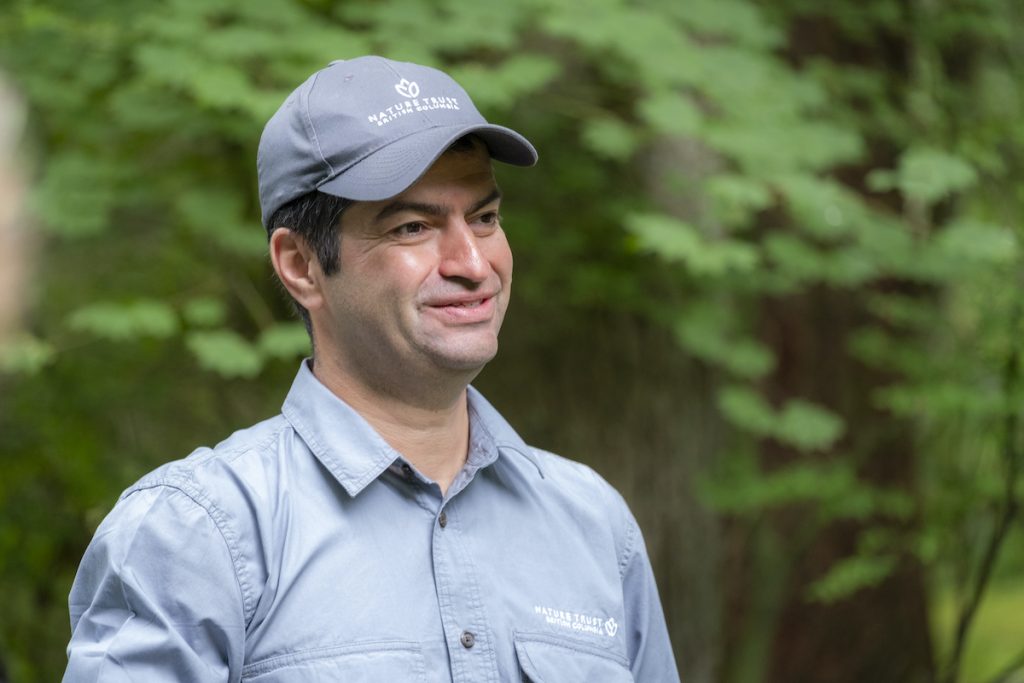 Jasper is the CEO of the Nature Trust of British Columbia (NTBC) and serves on the Pacific Birds International Management Board. NTBC was a founding member of Pacific Birds in the early 1990s.

Like the migratory birds Jasper works to protect, Jasper’s life history traverses the Canada-U.S. border. He was born and raised in and around Vancouver, British Columbia. He grew up exploring the outdoors of BC with his parents, occasionally crossing into Washington, Oregon, and California. Camping in the San Juan Islands was a particular favorite.

Jasper attended Queen’s University, where he was taught by ornithologist Dr. Fred Cooke. Fred later gave Jasper the opportunity to spend a summer studying seabird nesting ecology on Triangle Island. Triangle Island is BC’s largest seabird colony – the summer home for about a million auklets, puffins, and murres. Jasper later earned a PhD in Biology at the University of Miami, with a focus on and invasive wetland fish species. His fieldwork necessitated dodging alligators and various venomous snakes in the Florida Everglades.

His first conservation job included delivering a North American Wetlands Conservation Act (NAWCA) grant in San Francisco Bay Area for a partnership which included Ducks Unlimited, U.S. Fish and Wildlife Service, and the State of California. He also served on the technical committee for the San Francisco Bay Joint Venture and later served on the U.S. Staff of the North American Wetlands Conservation Council. In 2008 he moved home to Canada and worked as an environmental specialist at BC Hydro (an important funding partner for all three Joint Ventures in BC) before joining NTBC.

NTBC is celebrating its 50th Anniversary in 2021. One of its first major land acquisitions was Widgeon Valley, a magnificent wetland in Metro Vancouver which is co-managed with Environment and Climate Change Canada. Since then, NTBC has grown to become Canada’s largest regional land trust.

Through decades of conservation partnerships, NTBC has secured over 178,000 acres across BC. This includes numerous estuaries on BC’s Pacific Coast. NTBC was approved for its first NAWCA grant in 2021. This grant will protect a tidal slough in the Salmon River Estuary on Vancouver Island, an entire island in the Salish Sea, and a wetland in the Fraser Valley. Joining the NAWCA program adds an exciting new cross border component to NTBC’s partnerships and fundraising.

Jasper and his wife Caitlin are now raising three very active young children, surrounded by nature on BC’s beautiful coast. He is proud of their growing waterbird identification skills and enthusiasm for fishing.

The Nature Trust of BC protects the natural riches of British Columbia by building a treasury of wild natural areas that conserve iconic and important species at risk.