Uplifted by Cranes in the Depth of Winter 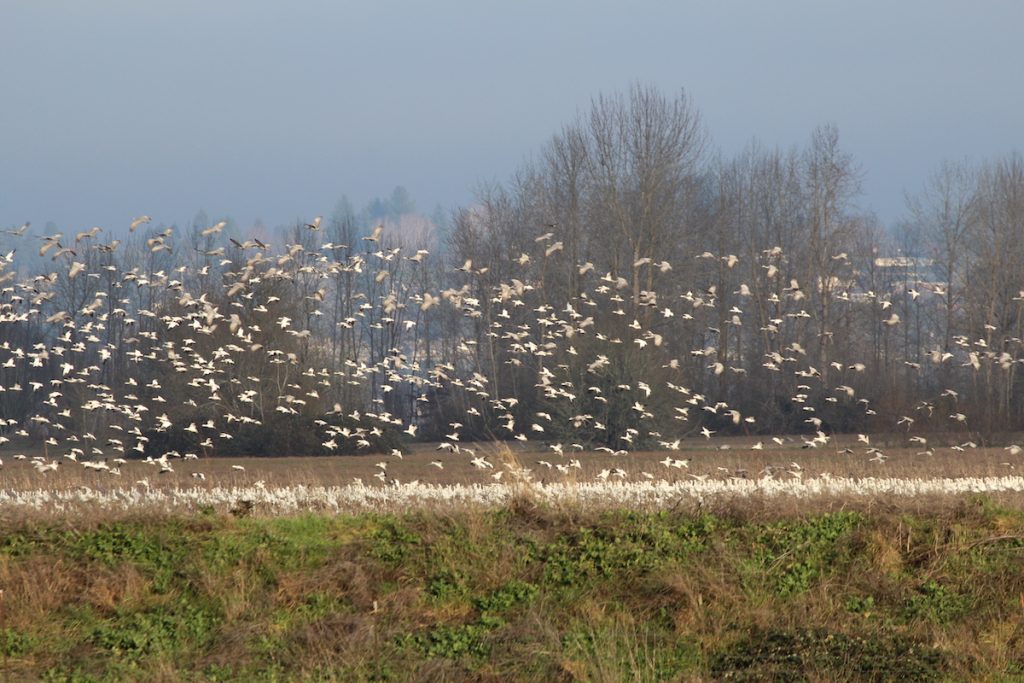 Monica Iglecia, U.S. Coordinator at Pacific Birds, shares her experiences with Sandhill Cranes in the Portland-Vancouver area, from listening to them on a foggy day on Sauvie Island to viewing them at a land trust property nearby. We are thankful for the foresight and hard work that has gone into conserving areas like this where birds and people can both thrive.

My first experience with Sandhill Cranes in Oregon was one late afternoon on Sauvie Island Wildlife Area, an area managed by the Oregon Department of Fish and Wildlife just north of Portland. I had heard this island was a treasure and as I ventured out on a rainy day in November 2020, I wasn’t sure what to expect. I found a trailhead, parked my car, slipped my neck through the binocular straps, raised the hood on my raincoat and headed out. It was extremely foggy that day and I could barely see 100 feet in front of me. I began to hear the distant trill of Sandhill Cranes and I felt my heart flutter with excitement. As I continued walking I became immersed in their prehistoric sounding calls reverberating across the fields and through the air. They were calling to each other in the fog, perhaps trying to find their way to each other or to stake a claim on a nice spot to roost for the night, but I couldn’t see a thing.

At a recent event held by Columbia Land Trust, I had another opportunity to encounter one of the northernmost groups of wintering Sandhill Cranes. Just a short crane flight from Sauvie Island, across the Columbia River to Washington, this is where cranes forage before their evening commute to the island to roost. It was a surprisingly sunny winter day and a family of Bald Eagles was harassing the flock. Two juvenile Bald Eagles seemed to test their might as they caused the enormous flock of thousands of birds including Sandhill Cranes, Snow Geese, and Canada Geese to rise from the farm fields shocking the onlookers with the sheer number of birds hidden from view only moments before.

Columbia Land Trust owns and manages this area, appropriately called Cranesʻ Landing, for the benefit of a group of cranes that spend the nonbreeding season along the Oregon /Washington border. Come spring, they will catch a thermal into the air and head north to coastal British Columbia to nest. Upon their return flight, they will fly nonstop right back to this network of vital habitats around Sauvie Island and Cranesʻ Landing, where fields are managed to be plentiful and we eagerly await their arrival.

In the dark days of the Oregon winter, this glimpse of something spectacular was just what I needed. From their haunting calls in the fog to spectacular views on sunny days, Sandhill Cranes are a true treasure. Something to be heard, felt, and if you are lucky, even seen.