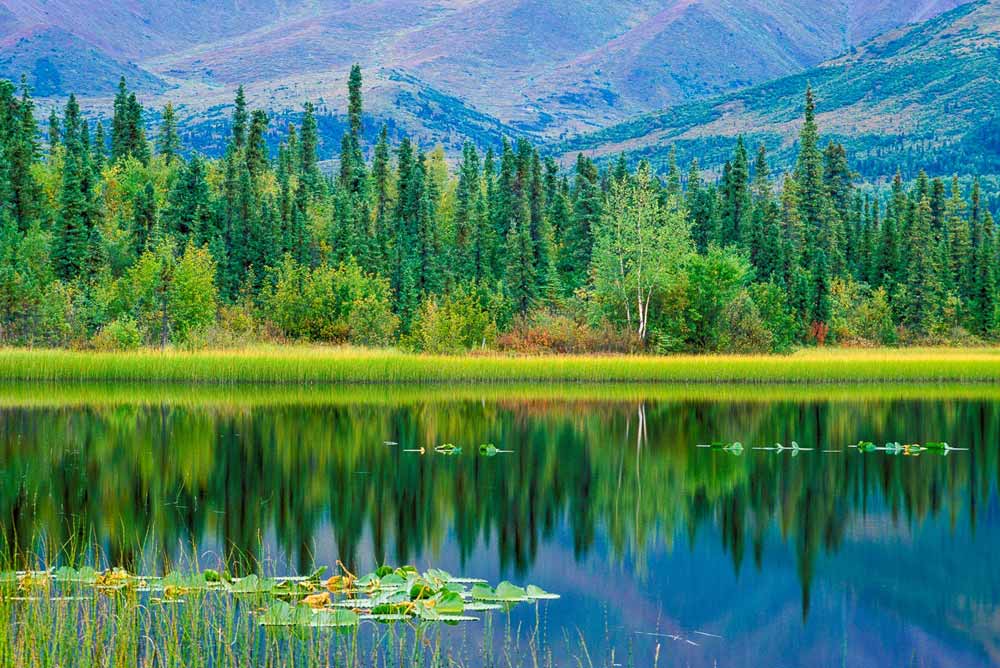 Alaska’s boreal forest spans most of interior Alaska. It is a mosaic of evergreens, deciduous trees and shrubs that create a patchwork of ecosystems across the landscape. Permafrost underlays this patchwork in many boreal regions, which, along with cold temperatures and long winters, limits plant species diversity. Nonetheless, the boreal forest is rich with birds. Almost half of the 700 bird species that regularly occur in the U.S. and Canada rely on the boreal forest. Among them are species of conservation concern such as Blackpoll Warbler, Olive-sided Flycatcher, Rusty Blackbird, and Lesser Yellowlegs.

On a continental scale, the boreal and arctic regions are likely to see some of the most dramatic changes from a warming climate, including permafrost melting, wetlands drying and changes in forest fire frequency and intensity.

Other Habitats Our Birds Need

Alaska has vast expanses of arctic and subalpine tundra characterized by low temperatures, permafrost, and a short growing season.

Alaska’s boreal forest spans most of interior Alaska. It is a mosaic of evergreens, deciduous trees and shrubs that create a patchwork of ecosystems across the landscape.

Conifer forests, including our magnificent temperate rainforests, dominate the Pacific Northwest from California to southeast Alaska.

Estuaries occur where freshwater rivers meet the salt waters of the ocean. They are one of most biologically rich habitats on Earth, thanks to the mixing of nutrients from both the land and sea.

Freshwater wetlands are the hallmark of the Pacific Americas Flyway. Wetlands are subject to periodic flooding and are further characterized by their soil type, hydrology and vegetation.

‘Ohi’a and in some areas koa trees dominate the canopy of the lush cloud forests found on the higher elevations of Kaua’i, Maui, Hawai’i, O’ahu, and Moloka’i.

Rocky shorelines along the North Pacific coastline occupy the region between high and low tide. They may be rocky cliffs, boulder rubble, wave-pounded shelves, or sheltered rocky shores.

Oak and prairie ecosystems support a unique suite of specialized birds. They are home to a handful of imperiled species such as Streaked Horned Lark and Oregon Vesper Sparrow.

An atoll is a coral reef island, or islets. They are are characteristically ring-shaped with a central lagoon, and sometimes a central island.

Pelagic habitats, one of many habitats in the marine environment, include the open ocean. Birds that spend time in the pelagic zone must be able to withstand the salt water, wind and waves–and some do for years at a time.

Riparian corridors occur along rivers and streams and across floodplains and terraces. Healthy riparian systems have a dense plant cover that provides shade, predator protection, food, and nesting habitat for resident and migratory birds.

Many seabirds spend most of their life on the water. They come to land for the nesting season, taking advantage of the safe haven offered by inaccessible cliffs and bluffs. Each species has a unique nesting niche.